4) List Breyer packaging types in chronological order from earliest to latest (ending with the 1980's brown picture boxes). Provide date ranges to the best of your knowledge.
Any viewer of Antiques Roadshow can tell you that vintage toys and collectibles with their original boxes are usually worth considerably more than those without them. Though this has long been common knowledge to collectors of dolls, toy trucks, vintage piggy banks, and so on, it has been a bit slower to resonate in the model horse hobby.

A few years ago at a large live show, I tried to explain to the show hostess the importance of original packaging as it relates to collectibility showing and judging. When I told her that some rare boxes were worth substantially more than the actual models that came in the boxes, in my case, a Breyer Mountie with the original cardboard picture box, she scoffed and told me she didn't believe that. 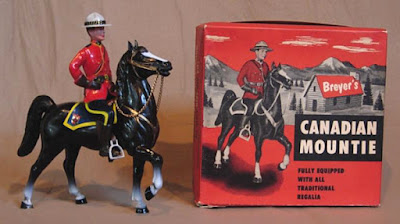 I found her attitude quite disheartening, but eBay prices have absolutely borne out my assertion. For example, a mint Mountie set sans box might fetch around $75-100, but the handful of sets with boxes I've seen sell have brought well over $500. Recently, a Mahogany Proud Arabian Mare in a blister seal shadowbox sold for more than $5000. In counterpoint, the mare alone without the box can be acquired for as little as $20-30. 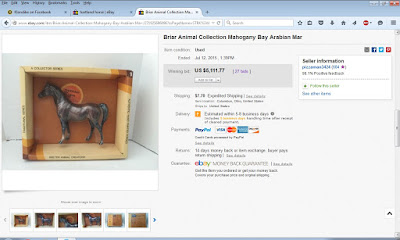 Showcase boxes, most of which feature run-of-the-mill $20 models like Clydesdale Stallions or Family Arabians routinely sell for over $1000. And just to really drive the point home, a touchability box with no model in it whatsoever sold for more than $1200 a few years ago. I could quote many more examples, but you get the point.

That said, this question about original packaging is important for collectibility judges for two reasons: 1) because original boxes are an integral part of the collectibility and provenance of a piece, and 2) because it demonstrates a fundamental understanding of Breyer's history.

So, in the beginning (the 1950s), there were cardboard mailer boxes---usually brown or white. Many of them had nothing more printed on them than Breyer's address and To/From blanks. They were sealed with brown tape, and the model's number and sometimes color or name were stamped on the top, usually on the tape. Most are sealed with heavy staples on the bottom. Some of these early boxes featured line drawings of the models inside. The mailers in general are not wildly rare, but finding them for certain models, especially those made only for a short time, is quite challenging.

In the mid-1950s, Breyer introduced colorful boxes for their models with TV tie-ins. Breyer's horse and rider sets were not directly based on any of the popular cowboy shows then popular (Hartland beat them to that market), but they did produce generic riders on Furies and Western Ponies such as the Indian, Lucky Ranger, and the Mountie seen above. These boxes are quite scarce. Breyer did create licensed reproductions of TV stars like Lassie and Rin Tin Tin as well as Corky the Circus Boy. Lassie and Rinty came in brightly colored illustrated boxes which are hard to find. Interestingly, the only Corky and Bimbo box I know of is a simple mailer with a line drawing of the elephant on it (pictured in the group shot at the beginning of the post).

The animal molds issued by Breyer were also sold in cardboard mailers, some with line drawings. Surprisingly, they were sold this way well into the 1990s, almost 10 years after the introduction of the now ubiquitous clear-fronted yellow boxes.

The cardboard mailers remained in use for the horses into the early 1970s, but Breyer did experiment with different types of packaging near the end of that period. The 1968 Breyer dealer catalog references a new style of packaging that was first pictured on a January 1969 price list. These so-called "touchability" boxes were an experiment in display packaging that ultimately backfired. The boxes, which consist of a cardboard back surrounded by a raised cardboard frame, were open with no cellophane or plastic covering. The models were secured to the box only with elastic bands around the legs and body. While this did allow buyers to see exactly what they were purchasing, it also meant the models could easily be damaged. Very few examples of these boxes have been found by collectors, and based on information turned up by Breyer historian Nancy Young, only Family Arabians were ever released in this short-lived packaging.

By 1970, Breyer had come up with another new display packaging style, the showcase collection box, that allowed buyers to see the model without being able to handle it. These clear plastic boxes have been found with a variety of models in them, and while they are easier to find than touchability boxes, they are still quite rare and desirable. Unfortunately, the plastic comprising the boxes is rather flimsy and is prone to cracking and yellowing with age or rough handling. These boxes were discontinued in 1972 because, according to Peter Stone, they were too expensive and did not sell well enough to justify their continued use.


By 1972, Breyer had given up on see-through packaging and had returned to cardboard boxes. These "white" boxes featured a reversed color photo of the model inside against a line-drawing background in various colors.

Breyer also issued patriotic red, white, and blue boxes for the Elephant and Donkey models during the 1976 election year. Like the white boxes above, these are reasonably easy to find.

The 1970s also saw Breyer's first foray into carry case packaging. These cardboard boxes were the most colorful yet released by Breyer, and their plastic handles allowed kids like me to tote their Breyer models easily to friends' houses for playtime. The cases held individual models as well as sets of multiple horses. Some of the sets came with accessories such as books about the real horses (Lady Phase and Stud Spider), a halter (Proud Arab Mare sets), blankets (Clydesdale Mare and Foal set), a doll and tack, etc.

In the mid-1970s, Breyer issued a number of their smaller models on "blister cards"---cardboard backing with the model secured under a molded plastic bubble. These included the Classic Arabian and Quarter Horse foals in a variety of colors, the Stablemate line which was introduced in 1975, and Benji the movie star dog. (Benji's girlfriend Tiffany was intended to be released individually on a blister card as well, but it never happened due to poor sales of the paired set above.) This display packaging was a great success and is still in use today for Stablemates and other small models.


Breyer didn't entirely give up on line-drawing mailers for horses in these years. This rare Stablemate box was sold through the Sears catalog as a special run in 1975. 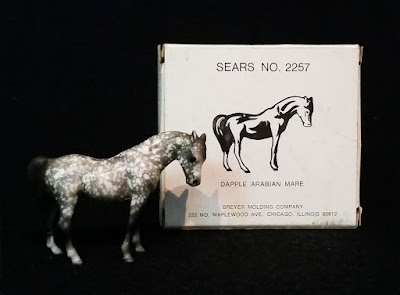 And this Proud Arabian Mare and English Saddle set was also a special run for Sears in 1977.

The mid-1970s also saw the introduction of the Classic Thoroughbreds and the Lipizzaner which were sold individually in colorful picture boxes with side panels featuring information about the real horses. The boxes were first issued on a white background and later on brown. With the rising popularity of Maureen Love molds, these boxes are becoming harder to find (or at least more expensive to acquire). 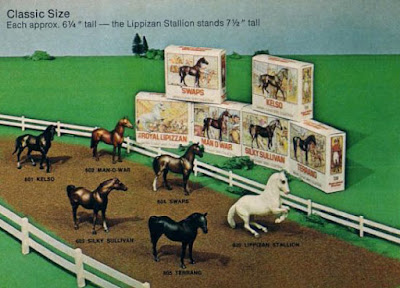 In the late 1970s, Breyer experimented with a third style of display packaging for traditional scale models, the blister wrap shadow boxes. They are square or rectangular cardboard shadow boxes in which the model is affixed to the back by a vacuum-formed plastic film. Like the earlier attempts at display packaging, these boxes were also short-lived. Despite instructions on the back of the box on how to safely remove the models, they were very easily broken when collectors tried to remove them from these boxes.

Breyer returned to solid cardboard boxes once again after this third failure with see-through packaging. From approximately 1979-1981, these boxes were made in shades of orangey or tannish-brown featuring a reversed color photo of the model inside.

In 1982, while the cardboard box design remained the same, the box art changed in color and design as seen in the photo below. The sides of the box also often had added blurbs about the real horse or the breed the model represented.


In the 1980s, Breyer once again experimented with see-through packaging. The flocked chestnut Rocking Horse (1985) and Kipper (1986) were both issued in a green backed box made of a clear plastic top that fit over the plastic bottom in the same fashion as the cardboard boxes. The Kipper boxes are the same size as the Rocking horse boxes and were probably left overs. Sam I Am was issued as a special run in a similar (but far more flimsy) box in 1984.

Cardboard mailers were used in the 1980s and into the 1990s as well for special runs from the various holiday catalogs. Some featured line drawings and some had labels affixed with color images of the models. These boxes are all fairly common.

In 1986, Breyer introduced the now well-known clear-fronted yellow boxes, their first really successful see-through packaging design for the large scale models. The boxes have become more colorful over the years, but the same basic design has lasted now for going on 30 years.

And there you have it! A (hopefully) mostly comprehensive list of Breyer packaging from the beginning until the advent of the yellow boxes. Coming next will be a post about the rising popularity of vintage customs and how collectibility applies to them (before we return to the judging test questions). Enjoy!
Posted by Kirsten Wellman at 9:38 AM 6 comments: