I posted this explanation on Model Horse Blab several years ago, and I thought it was worth repeating here as it's a question I get asked frequently. Just as confusion exists over whether or not a Proud Arab Mare is old mold or new mold, many hobbyists are confused by the molds that were made to replace the PAM, the In-Between Mare and the Family Arabian Mare. The history of these three molds is complicated and convoluted to say the least, but the trick to telling them apart is surprisingly easy (which will be revealed at the end of this post). 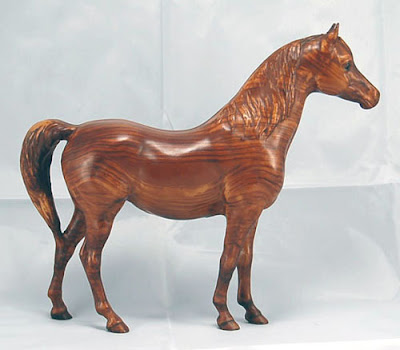 As I discussed in a previous blog post, Breyer's Proud Arab Mare and Foal molds were originally closely copied from Hagen-Renaker designs. After a very short period of production, less than two years, HR successfully sued Breyer for copyright infringement. Production of the PAM and PAF stopped in late 1959. The FAS was not deemed similar enough to HR's Amir model, so that mold remained a part of the Breyer line. But that did, however, leave Breyer in need of a new mare (and foal) for their Arabian family. 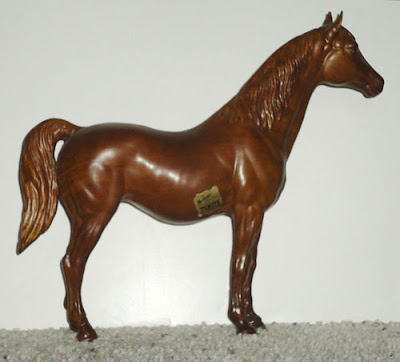 In early 1960, Breyer molded and produced a small number of models aptly named the In-Between Mare. She is the same size as the PAM but more closely resembles the coarser FAM in looks. Her neck is long and she sports a bit of a hay belly. Due to molding problems, these mares lean to the left. She has been found in Alabaster, Woodgrain, and Appaloosa so far, which makes sense as those are 3 of the 4 colors the PAM had been available in. A handful of each color are known to collectors, and it's possible that examples of the 4th color, bay, may eventually turn up. Enough IBMs have been found---nearly a dozen---that there is some speculation that they may have been released from the factory to stores, possibly accidentally. The presence of the gold tenite stickers on several of the woodgrains would certainly suggest that they were intended for distribution. 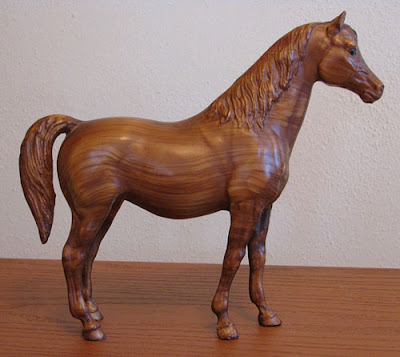 Whatever the case, production of the In-Between Mare was ultimately scrapped in favor of the similar but more attractive Family Arab Mare who debuted later in 1960. She has been in production, along with the FAF and FAS, ever since. (The PAM of course was re-issued in 1971.)

So how does a casual collector determine which of the three mares they have? Obviously, all three are distinctly different in terms of sculpting style and stance, and to someone familiar with OF Breyers, the nuances are easy to discern. Happily, for those less well-versed in Breyer minutiae, there is a very simple trick to tell which is which---the tails. 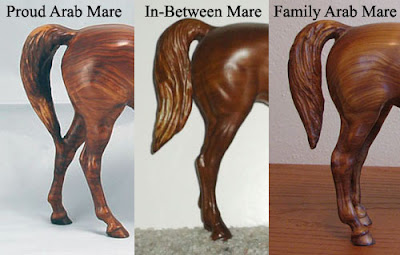 As you can see, the end of the PAM's tail is attached to her left hock. The In-Between Mare's tail touches her right buttock before angling out again. And the FAM's tail hangs loose. Tada!
Posted by Kirsten Wellman at 9:15 AM