What is collectibility and why should we care?

Collectibility as a stand-alone division is a fairly new concept in the hobby. When I first started live showing in 1991, halter classes were only split into OF and RRH (aka customs). Resins were almost unknown, and everything OF was fair game in the OF classes---Breyers, Hartlands, Hagen-Renakers, Beswicks, etc. Most people showed only Breyers, with Hartlands and especially chinas being a rarity. Judging for OFs was a mix of breed standards and rarity, and which was weighted more depended entirely on the judge. For example, I used to win regularly with the Monrovia HRs my grandmother gave me because they were both well-conformed as well as rare (relatively speaking at that time, anyway). Furthermore, it was not unusual to see a horse like a Hartland Regal Saddlebred or a Florentine 5-Gaiter win a gaited class despite anatomical abnormalities or an unrealistic color because they were the rarest models on the table. Halter judging was hugely subjective to say the least. 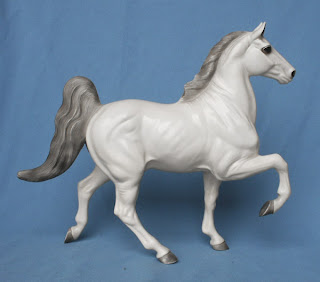 (The Regal Hartland ASB puts the fun in funky, but she's not quite what most Saddlebred fanciers would consider well-conformed.)

It was not until the late 1990s that judging OFs based on the ABCs (anatomy, biomechanics/breed standard, and conformation) as well as collectibility began to fall out of favor. Customs, resins, and chinas were judged by the ABCs, so following suit in OF plastic halter was a logical continuation of the trend. At NAN in 1998 and 1999, a few token collectibility classes were added to the OF Plastic division to deal with decorators and woodgrains. But it was not until 2001 that OF plastic collectibility was recognized as a necessary division in its own right with OF china collectibility following the next year in 2002. Since then, both divisions have grown exponentially, and most live shows these days offer halter and collectibility divisions split out between Breyers, Stones, and chinas (and occasionally Hartlands, too).

So that said, how is collectibility judged in the hobby and what makes a model collectible?

Some might argue that collectibility can be equated with the biggest price tag or the highest perceived value, and while that is sometimes the case, it just as often isn’t true. I personally usually equate collectibility with rarity. That is my primary criterion when judging. I also factor in age, desirability, and to a lesser degree, condition.

Rarity is pretty much self-explanatory. Models made in limited numbers are hard to find, old or new. The more limited, the better usually. However, because one-of-a-kind models are surprisingly easy to acquire these days, a OOAK model is not necessarily better or more rare (in terms of perception) than a model of which 2 or 3 or even 10 examples are known.

Age is important because while some models were not necessarily made in small numbers, they may have been made 40 or 50 years ago and few have survived to make it into collectors' hands. Newer rare models can often be acquired with a little patience and a willingness to pay the going rate. Older rare models are often much harder to acquire because few are known, and those that are known are often in "black hole" collections. Old and rare usually trumps new and rare.

Desirability can definitely play a role in collectibility as well. Certain molds and models have more cachet than others, like vintage decorators, for example. Some models even obtain a sort of legendary status because of their rarity and interesting history, such as the wedgewood Longhorn or the $13,500 test run palomino Alborozo.

Condition is my last and least important consideration for several reasons. First, most showers these days know to bring only their best models, and those with noticeable scratches or dings usually remain at home, so condition is rarely an issue. Secondly, the chances of condition being the tie-breaker in collectibility are pretty slim. There are almost always more important factors that will sort the entries out (i.e. the three criteria discussed above). And thirdly, many models that show in collectibility are old, some more than 50 years old, and I am more than willing to forgive a few minor condition issues if the piece is clearly superior to what else is on the table. The same can be applicable to newer rare models. Ear tip rubs or hoof rubs are of little importance in the grand scheme of things.

So all that having been said, the point of the collectibility division is to celebrate those unique models that do not fit into the usual breed classes but that are still highly desirable to many collectors. Things like decorators, woodgrains, lamps, clocks, night lights, horse and rider sets, test runs, and OOAKs are typical collectibility entries as well as models with original ephemera such as boxes, hang tags, and stickers.

Becoming a good judge of collectibility requires immersion in the subject and a fascination with the history and minutiae of the companies and models involved. Thankfully, model horse hobbyists have written a number of excellent reference books on the various makes available. I'll make my recommended reading list the subject of my next post.
Posted by Kirsten Wellman at 8:37 PM 1 comment:

An intro of sorts

Most people in the model horse community know me as a customizer, something I've been dabbling in since 1997. I mostly paint, but I do the odd bit of sculpting and restoration here and there, and I blog about my studio work (such as it is) when time permits.

So why am I writing a collectibility blog?

The short answer is that I'm a history geek and always have been. My background is Classical history and archaeology, but I'm also fascinated by horse racing history and memorabilia, Native American art and culture, vintage textiles, needlework, etc. I'm a huge Antiques Roadshow fan, and one of my favorite things to do is "go junking." I think my passion for model horse history and collectibility is therefore a fairly natural extension of these interests.

Like many hobbyists, my collection began with Breyers in the early 1980s. Subscriptions to Just About Horses, The Hobby Horse News, and several other publications helped me learn a great deal about the hobby and its history. And through the classifieds in JAH, I became acquainted with other collectors in my area who taught me a lot about vintage Breyers. My collection has branched out since then to include Hartlands, Stones, OF and CMG chinas, customs, and resins, but my first love is still vintage Breyers.

It's been fascinating to me to see how the hobby has changed in the last 10 to 15 years with widespread access to the internet. Collectors these days can jump right into the hobby and specialize instantly with Stones or resins or performance set-ups, and I'm frequently surprised by hobby history questions that crop up on Blab (and elsewhere). Queries about how to identify chalkies, the differences between Old Mold and New Mold PAMs, and the strange similarities between certain Hagen-Renakers and Breyers are common, and I've always taken the answers for granted because when I got into the hobby, most everyone collected Breyers or HRs and was fairly well-versed in their respective histories, even the customizers. But these days, with the aforementioned ability to instantly specialize, a Stone collector might not realize that Peter Stone actually worked for Breyer for decades before starting his own company, and resin collectors may not be aware that the Rio Rondo QH1 really kicked off the resin trend in the early 1990s.

So with this blog, I plan to focus on the collectibility aspect of a variety of manufacturers and makes, collectibility in the show ring, and include a healthy dose of hobby history to pass along some of the fun information I've learned over the years as well. I think the first topic will be about collectibility and what makes something collectible, a subject I hope to get a start on writing this weekend.
Posted by Kirsten Wellman at 9:42 AM 2 comments: