Sitting at work today, I feel like I've been gone for a couple of weeks instead of just a few days. I think it must be because I crammed so much into the last week with so little sleep. I am so very tired, and I can hardly wait for the weekend so I can sleep in, unpack completely (how novel!), and make room for my BreyerFest loot. BreyerFest weekend is such a whirlwind of activity and shopping and socializing, but it's always a blast!

My family attended the first BreyerFest in 1990, and we've been to every one since. This one, the 29th (I can hardly believe it!), stands out to me as one of the most fun in recent years. As a lifelong horse racing fan, the "Off to the Races" theme was right up my alley, and Breyer did an outstanding job selecting guest horses and designing special run models.

On Friday morning, well before sunrise, we rolled out to the Altech Arena at the Kentucky Horse Park for the BreyerFest Open Show (because sleeping is for after BreyerFest, am I right?). I didn't manage to take a lot of pictures because we had a pretty full day of showing, but my sister was able to get most of the collectors' classes at least, so I'll post those in a future entry. The day started off with a bang for us when my collector's class Variety entry won first place! 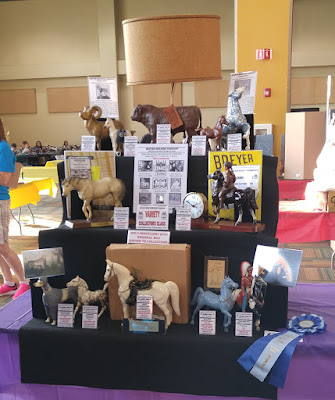 To add to the excitement, my sister's Theme collector's class entry got second place. Sarah was absolutely thrilled by this because she congas the Pacer mold, and the prize model for second was a beautiful grey tobiano Pacer! 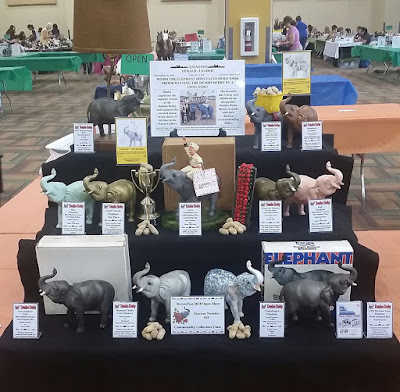 The competition in the collectibility division was fierce as usual, and the overall winners were definitely deserving. The overall reserve champ was this stunning 1975 test run dapple grey Cantering Welsh Pony owned by D'Arry Jone Frank. D'Arry got it from Marney Walerius, and the pony was the start of their long friendship. Marney, who did consulting work for Breyer, introduced D'Arry to Peter Stone, and D'Arry eventually painted a number of test runs for Breyer herself, all because of this pony. 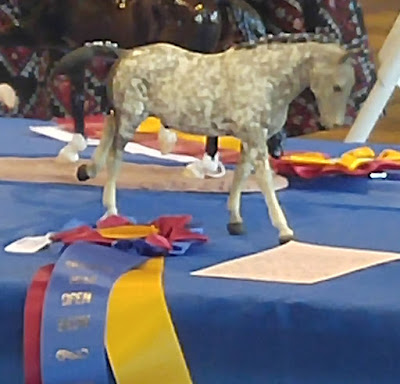 The overall champion in collectibility was Ethan Lewis' fabulous 2014 BreyerFest Early Bird raffle grullo Alborozo. It was such a treat to see this amazing model in person! Only three were made. 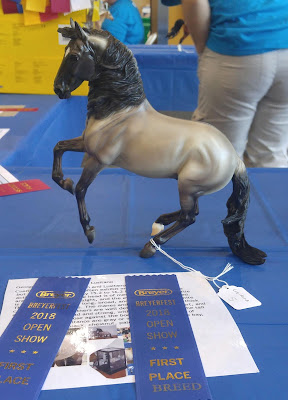 On Saturday, we ventured out to the Park once again to visit with the celebration horses and do a bit of shopping. Our first stop was the newly renovated American Saddlebred museum. The new gallery is nearing completion and is starting to fill up with amazing artwork. If you're a fan of George Ford Morris' work (and you really should be if you're not already), this is a must-see collection. 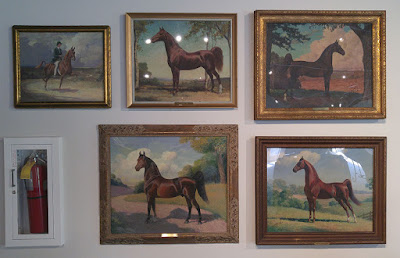 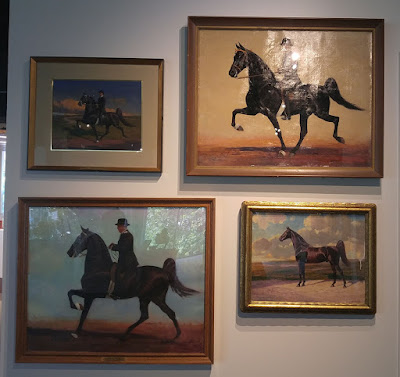 We then headed into the park proper... 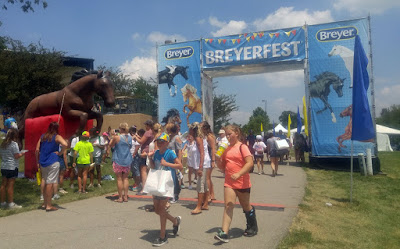 ...to pick up our one-day ticket Stablemates (aren't they fabulous?)...

...and to pick up our celebration models and buy raffle tickets at the Breyer booth in the covered arena. The silent auction models were on display there as usual.


Sarah and I then headed next door to the celebration horse barn to see Foiled Again, the 14 year-old champion Standardbred gelding who has become the harness racing world's richest race horse. He just won his 100th race, and the hardy bay pacer will run until the end of the year. (Harness racers are not allowed to run beyond the age of 14 for some reason.) Not only did we get to see the great horse, we got to pet him and have our picture taken with him! 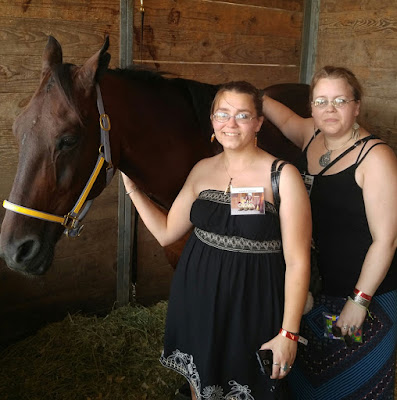 We also found Harley, the lovely American Sugarbush drafter that you may recognize from the Kentucky Derby post parade. He ponies Thoroughbreds to the gate at Churchill Downs and has quite a fan following (and deservedly so). 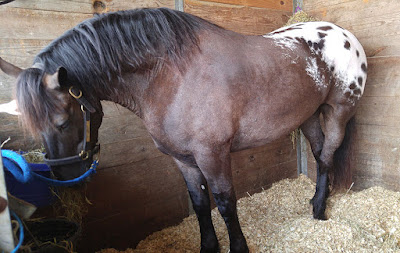 As a lifelong horse racing fan, I was determined to find Brass Hat, the hard-knocking Thoroughbred gelding who is cut from similar cloth as Foiled Again. Brass Hat raced 40 times in a career spanning seven years, and nearly all of his starts came in graded stakes company, including a win in the prestigious G1 Donn Handicap in 2006. 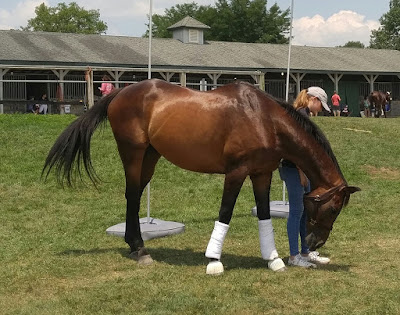 Some other interesting horses we spotted Saturday afternoon as we waited for the raffle (we didn't win).

We rarely get the chance to attend BreyerFest on Sunday because we're usually on the road home bright and early, but this year, we weren't able to trade our special run tent tickets for another day. So I went out to the park early to go through the lines while my sister packed up the van like the BreyerFest tetris champ she is. I thoroughly enjoyed being there while it was still quiet and cool. Several horses were out getting a little second breakfast or getting groomed for their public appearances.

I had a bit of time to kill, so I headed up to the Hall of Champions to see the boys before getting in line. Go For Gin, the 1994 Kentucky Derby winner, was definitely not a morning person, but he was still good enough to pose for a picture with me. 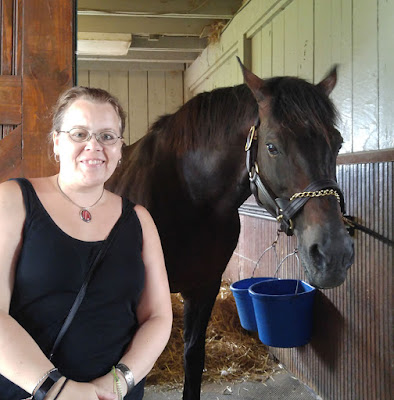 Breyer moved the special run tent to the paddock across the way from the Hall of Champion this year, and being separated from the Breyer store really improved both venues. Neither was overly crowded, the lines moved quickly, and the check out process was a breeze. Hooray!


Happily, I was able to pick up exactly what Sarah and I had hoped to get on my two trips through the line---I snagged the piebald elk and the glossy chestnut Duende for her, and I was delighted to get a glossy and a matte rose grey Proud Arabian Mare to keep my PAM conga up to date. The PAMs are chalky other than their socks, and they are just gorgeous! 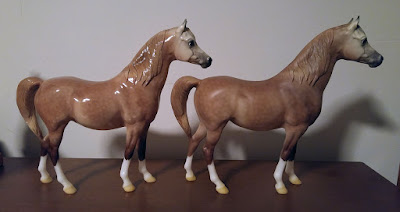 We had a wonderful weekend and got to see a number of our friends (and made some new friends, too!), but it never feels like enough time to really sit and down and have a good catch-up gabfest, and we didn't find everyone we wanted to see. The event has grown so much over the years that it's hard now to see and do everything and coordinate hang-outs, too. I think Sarah and I will just have to start coming a day or two early to be sure we ease into the week with plenty of socializing, haha!
Posted by Kirsten Wellman at 10:46 AM No comments:

It's no secret that I'm obsessed with the Breyer Proud Arabian Mare, and I actively conga the mold. I am incredibly fortunate to have been in the right place at the right time to acquire some of the very rarest examples of this mold, and I now have all of them except one.* But rather than let that stop me, I also enjoy collecting variations. Many, many, many variations. I may have a problem.

My weakness is the #215 dapple grey. She debuted in 1972 and remained in production through 1988, and because each one was hand-splattered and hand-painted, variations abound. A few of them are even pretty rare!

Some of them are glossy... 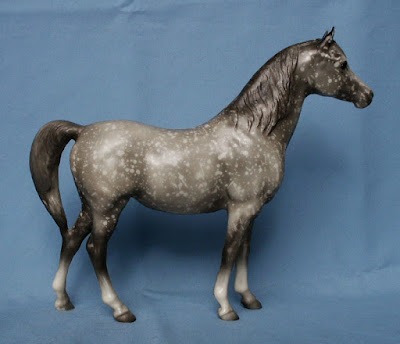 But most are matte... 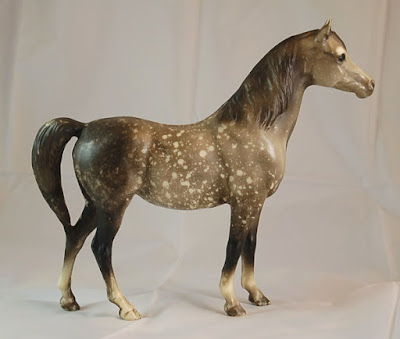 Some are basecoat chalky... 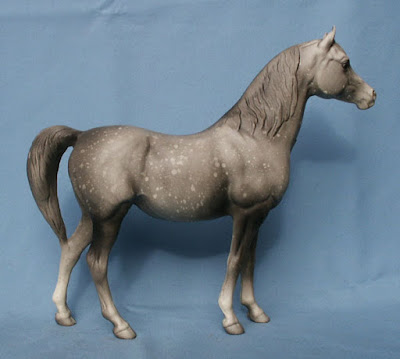 A very few are chalky plastic.... 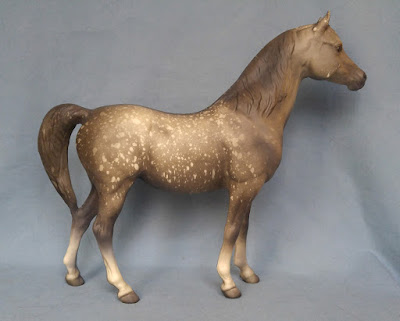 Some have tiny dapples... 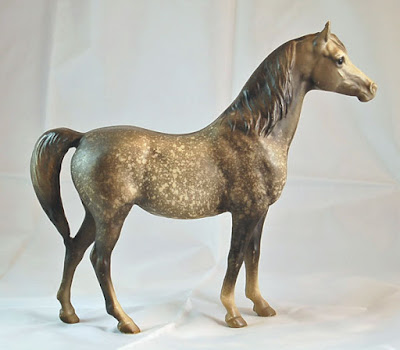 And this one has bizarre, huge dapples! 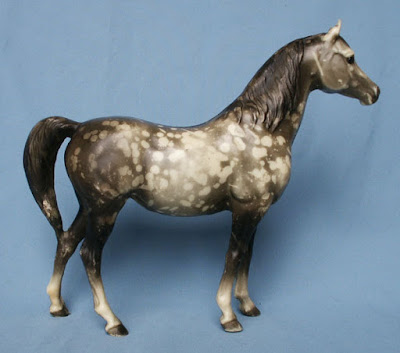 Some have pretty, haloed dapples... 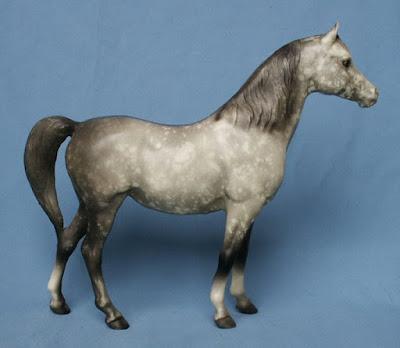 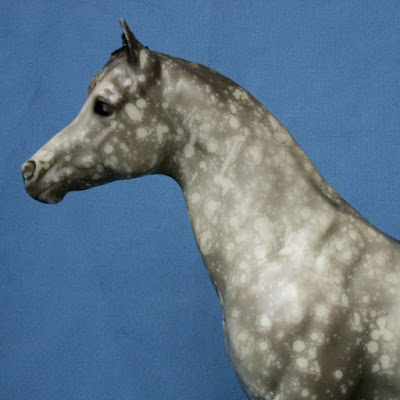 Some are very pale in color... 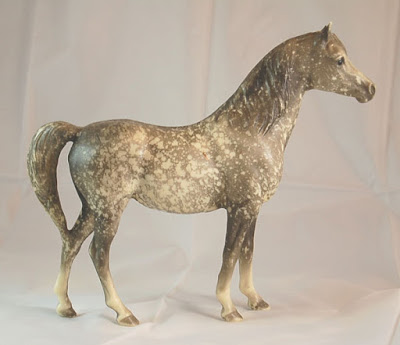 And some have dark shading, sometimes in odd places... 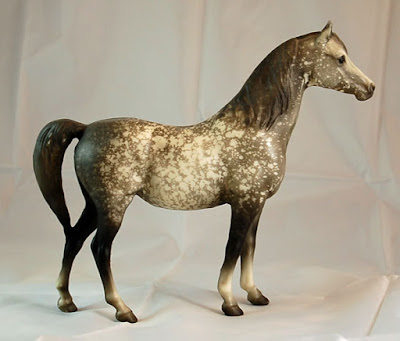 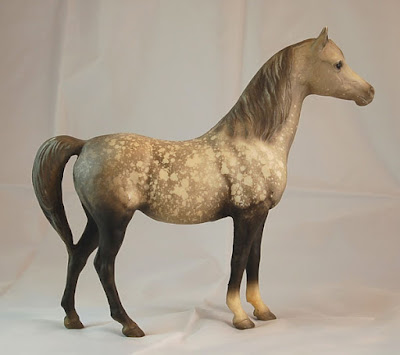 The ones made in the last few years of production are a lovely soft shade of grey. I bought this mare new at my local tack shop in 1987. 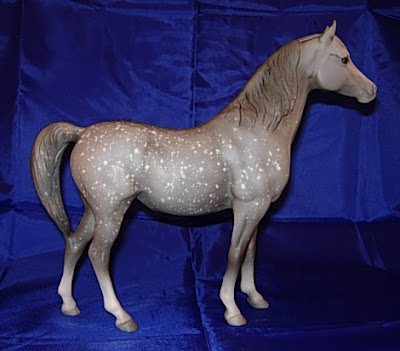 Not only do the shade of grey and the dappling style and placement vary, but the number of socks can vary, too. Four socks is the most common variation, but two socks is pretty typical as well. Many models also have substantial over-spray on their socks.

The rarest dapple grey PAMs (other than the chalkies) have black points. They are pictured only in the 1983 and 1984 catalogs, but in reality were made for less than a year, and they are therefore eagerly sought out by collectors. Some PAMs with charcoal grey points have been found, and they probably just pre-date the true black point mares. 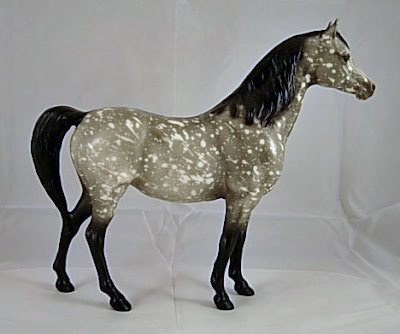 Rarest of all is the black point variation with four white socks. These mares are quite scarce and very rarely seen. A few mares with black points and two socks are also known. 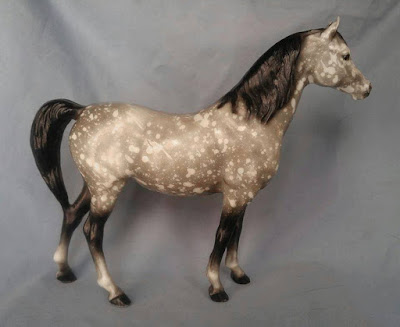 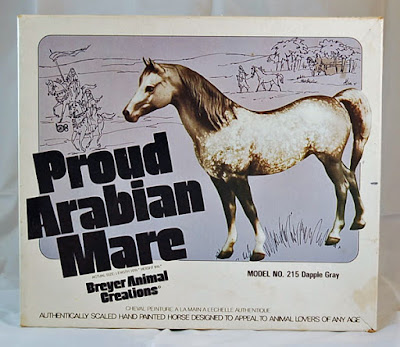 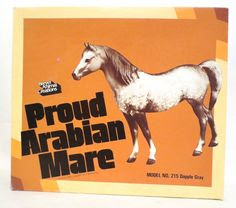 One of the most desirable boxes is the halter and carry case set made from 1972-1973. Breyer consultant and hobby godmother Marney Walerius once told me that she braided thousands of the halters included in these sets for Breyer. 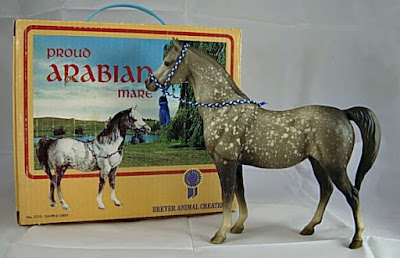 Dapple grey PAMs were probably sold in the vacuum-sealed "blister wrap" shadow boxes issued briefly in the late 1970s, but so far I have only seen mahogany examples in those boxes. A dapple grey will undoubtedly come to light someday.

I have a few more dapple grey PAMs not pictured here, but unless something really wacky comes along, I'm reasonably content with my obsessive conga. It's always fun to look though. You never know what sort of oddity might be in the next antique shop or eBay listing!

* I'm only missing the SR VRE PAM "Celebrity." Anyone looking to sell? :D
Posted by Kirsten Wellman at 11:45 AM 3 comments: