(My apologies for the terrible pun. I couldn't resist.)

Most collectors are familiar with the "Ranchcraft" line of Breyer woodgrain lamps sold by Dunning Industries in the 1960s and 1970s. They featured models such as the Running Mare and Foal, the Fighting Stallion, the Family Arab Foal, and even a few animals like the Longhorn Steer and the Brahma Bull. These woodgrain models were mounted on wooden bases and the lamps sported rustic burlap shades.A few non-woodgrain models graced these lamps, too, like the grey Elephant and Donkey and the Bay Rearing Stallion. 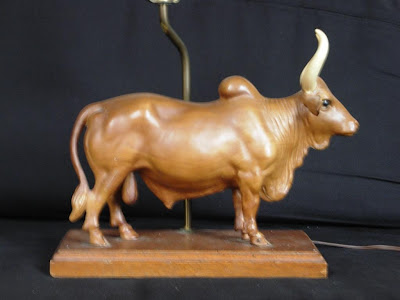 Less common, however, are the Western Horse lamps. Like the Western Horse clocks, they date to the 1950s, the earliest part of Breyer's model horse history. The Western Horse lamps, as with the clocks, have turned up in both alabaster and palomino. In my experience, the alabasters usually come on black-painted metal bases while the palominos are typically seen on brown-painted bases. A few green-painted bases have been found, too. That said, they are fairly scarce, and I've seen only a handful of these neat old lamps. 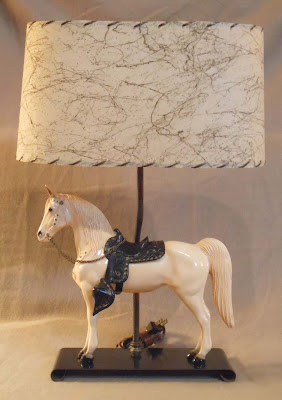 An alabaster Western Horse on a black base
(The shade is 1950s vintage but not original to the piece.) 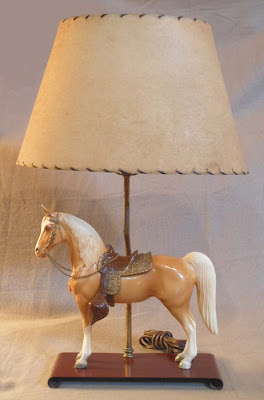 A palomino Western Horse on a brown base
(I believe this shade is original to the piece
as I have seen more just like it with other
scroll base lamps.)

My mom, sister, and I recently acquired the palomino lamp pictured above, and we were pleased to discover a manufacturer's sticker on the bottom of the base. As far as I know, no other examples are known with any sort of identifying marks (although if you happen to have one, I'd love to know!), so we were pretty excited to finally have a maker's name to add to our provenance files. 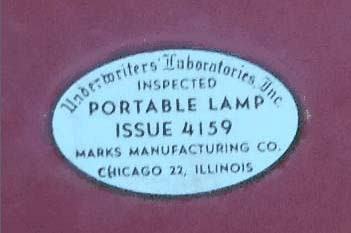 I have not yet been able to track down much information about the Marks Manufacturing Company, but as I work in a top-notch research library, that of my alma mater, the University of Chicago, I have access to some handy sources like a 1956 Chicago phone book. I was able to track down the address of Marks, and  like the Mastercrafter Clock Company, it was a near neighbor of the Breyer factory. All three were located just west of downtown Chicago. Mastercrafters was about one mile due east of Breyer, and Marks was a bit northeast, about 2 miles away.

The use of the zone number (22) rather than a zip code most likely dates this piece to the 1950s (or possibly the very early 1960s at the latest). Based on pictures I've found of other (non-horse) Marks made lamps, the company appears to have been in business as early as the 1930s if not earlier. I have not yet been able to determine if it was related to the well-known Clayton Mark and Company (of Evanston, IL) and Mark (no "s") Manufacturing Company of Indiana. The latter two companies specialized in steel manufacturing of pipes and well equipment and were founded by Clayton Mark (of Marktown fame) and his sons. It's not a huge stretch to think that someone in the family might have opted for the decorative side of metal work, but it could also be a complete coincidence.

I plan to do more digging to track down the history of Marks. I'm very curious to know how long the company was in business after their collaboration with Breyer and whether or not it was related to one of Clayton Mark's companies. I'll be sure to blog about anything I find!

Next time, some news on those chinas we all Love!
Posted by Kirsten Wellman at 8:48 PM 9 comments: