The history of model horse manufacturers is full of copies, most of them unauthorized. Many are obvious knock-offs made quickly and cheaply. Very often, they are easy to spot because of crude sculpting, cheap materials, or poor painting or glazing. But some fakes are surprisingly cunning, so much so that they have confused collectors and even fooled company employees. One group of clever look-alikes has intrigued me for years.

First, some backstory to set the scene. During World War II, material shortages and rationing meant that foreign imports---from dishes to toys to tchotchkes---fell to almost nothing in the United States, and many Americans sought to fill the void by opening their own cottage industries. In southern California, numerous small pottery companies sprang up during and right after the war. Hagen-Renaker was one of the most successful of these potteries, and they enjoyed booming sales of their animal figurines well into the 1950s. By the late 1950s, however, their sales were beginning to suffer because of a huge influx of cheap imitation imports from Japan.

Hagen-Renaker did their best to stay afloat by offering innovative new wares that catered to the mid-century modern aesthetic of the time, including the Black Bisque line made in Spring 1959 only. The Black Bisque figurines were a strange mish-mash of sculptural styles---realistic, elegantly stylized, and even cartoony. As the name suggests, they were usually finished with a soft, matte black earthenware underglaze (over white slip) mimicking the look of bisque.

The Hagen-Renaker mold book (page 70 if you follow the link) lists 29 pieces for the line which features sculptures from almost all of HR's major artists---Maureen Love, Tom Masterson, Will Climes, Nell Bortells, and Helen Perin Farnlund. Several of the items listed never made it beyond the test molding phase however.

While the vast majority of Black Bisque pieces are matte, a handful have a satin finish. 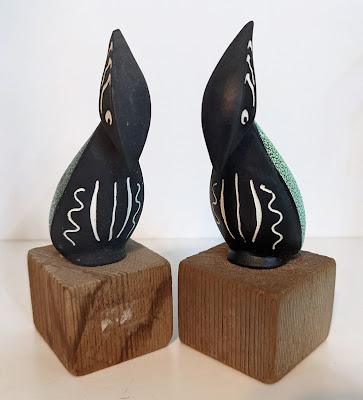 Most of them were decorated with incised white details, or turquoise pebble glazing, or both.

The pebble glaze on most Black Bisque pieces is usually turquoise, but some are more green-toned. A few are so dark that they have been described as "pine" green. 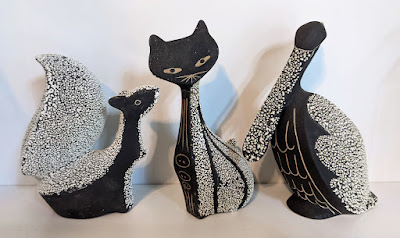 At first glance, these pieces appear to fit right in to the HR Black Bisque aesthetic, but they do differ in a few ways, chief among them being their size. As you can see from the picture below, they're quite a bit larger than most HR Black Bisque pieces. That said, while most Black Bisque pieces are around the same size, there are larger outliers like the nodder-headed Dachshund (about 9" long) and an unreleased Rooster. 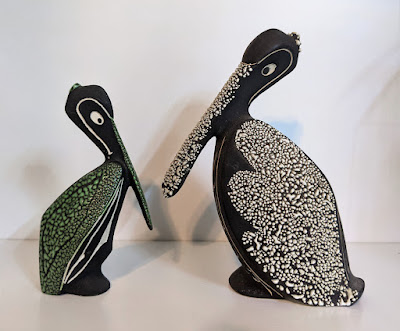 Stylistically, the sculpting is pretty spot on. The squirrel, for example, looks markedly similar to the skunk sculpted by Maureen Love. They're both an intriguing blend of pointed feet and noses with rounded backs and plumy tails. 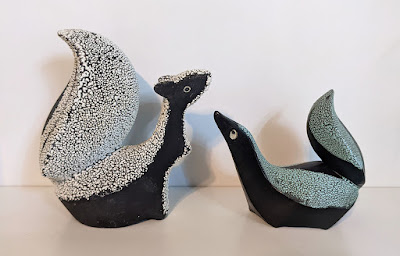 Even the cat fits right in between the medium and small flat-faced cats.

The problem with the white pebble glaze pieces however is that they can't be accounted for in the mold book nor on the Spring 1959 order form. The mold book lists three flat-faced cats---small, medium, and large---but four flat-faced cat molds are known to collectors. Three are typical Hagen-Renaker pieces all posed the same way with turquoise pebble glaze and similar white line patterns on their chests. They look very much alike other than their staggered heights. The fourth is the whited pebble glaze cat which not only faces in the opposite direction as the other cats but also has a tail, something the other three lack. The large cat, despite being listed on the 1959 order form apparently never went into regular production, and only two molded examples are known (one in typical black bisque coloration and the other a custom glazed ginger). (Hagen-Renaker Collector's Club members can see them both on the HRCC Field Guide under the Black Bisque section.)

Similarly, only one pelican is listed in the mold book, but two molds are known. And there is no mention of the squirrel anywhere at all.

In recent years, there has been growing doubt amongst Black Bisque fans, myself included, that the mystery mold white pebble glaze pieces were actually Hagen-Renakers. When I finally acquired the white pebble glaze cat, I was immediately suspicious that it was indeed an excellent copycat (pun intended) rather than an unlisted member of the Black Bisque line for several reasons. The pebble glaze itself is different in texture and style than what is usually seen on Hagen-Renakers---it is rounder and more raised, like little droplets. The underside of the piece however was the real giveaway. Note how the bottom of the Hagen-Renaker piece on the left is flat while the base of the white pebble glaze piece is recessed with a rim around the edge.

Another clue that made me suspicious was the quality---or rather, slight lack there of---of the decorative line designs on the white pebble glaze pieces. On HR pieces, these designs are usually rendered cleanly, precisely, and elegantly. 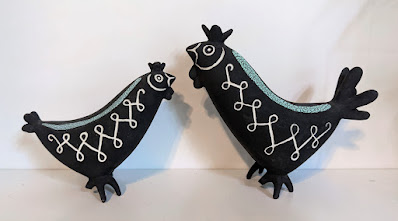 On the white pieces, the designs are a bit crudely rendered and the lines are a little wobbly. 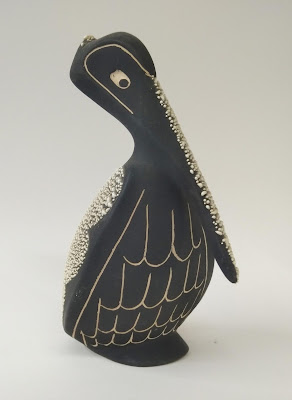 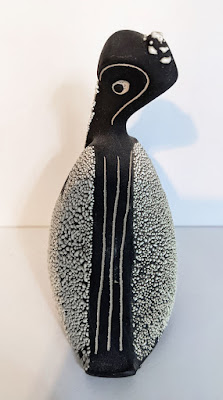 The conclusive proof came earlier this year when a white pebble glaze cat turned up on eBay with an original sticker still on the bottom. Voila! Kelvin Exclusives (made in Japan) is the culprit behind these clever copies! The design of this sticker matches an edge fragment of a sticker on the bottom of my white pelican. 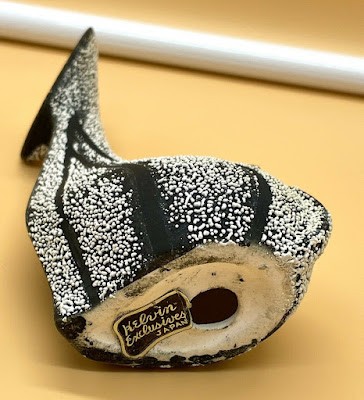 When I saw the sticker, I had a nagging feeling that the name was familiar for some reason. And then it dawned on me that I owned another Kelvin copy of a Hagen-Renaker piece, this cute squirrel clearly inspired by Robyn Sikking's squirrel family. Even the name and sticker design are copied from Hagen-Renaker. This fellow is called "Lotta Chatter," riffing on the Hagen-Renaker family of Mr. and Mrs. Chatter. 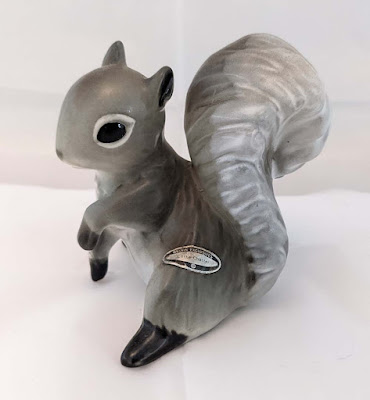 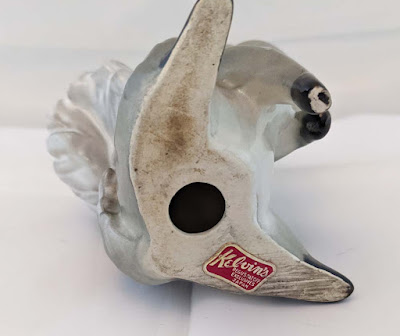 Robyn Sikking was said to have been one of the most copied artists in California, so it's not surprising that knock offs of her popular figurines exist. It is however a little perplexing that a short-lived line like Hagen-Renaker's Black Bisque collection would have been available long enough to not only be noticed but also copied. I have seen a few other faux Black Bisque pieces over the years including a horse, a zebra, and a bull. Sadly, I don't have pictures I can share, but the pieces mimicked Maureen Love's minimalist style surprisingly well. All have white pebble glaze and are about the same size as the real HR examples. I haven't had a chance to investigate Kelvin Exclusives yet, but I would guess those other faux pieces are undoubtedly Kelvin items as well. They certainly appear to match the three pieces I have.

So all that said, while we now know the white pebble glaze black bisque pieces are not Hagen-Renakers, they are still fairly popular with fans of the real Black Bisque pieces. They are charming and display nicely with their pottery cousins. Like many of their real counterparts, the white pebble glaze pieces seem to be somewhat hard to find. I have seen a few examples of each, probably a few more of the cats than the pelican or squirrel, and only one or two of the horse, zebra, and bull. Their seeming scarcity may be real---perhaps the copies sold poorly or they were only available for a short time? Or they may simply be flying under the radar unidentified, especially if their stickers have been removed. Whatever the case, I'm glad to have these interesting imposters in my collection, and I'm glad to finally know who made them.

Many, many thanks to author and collector Nancy Kelly for hosting a scan of the Hagen-Renaker mold book on her website and to purplemountains.com for hosting scans of decades worth of Hagen-Renaker order forms. Both sites are a treasure trove of information! And many thanks also to Kristina Lucas Francis, a fellow Black Bisque fan, for her insight on the glazes used and amazing HR recall!

Posted by Kirsten Wellman at 6:16 PM No comments: