Questions about "five-gaiter sorrel" models arise often enough that I thought it would be an interesting subject to tackle for this blog. As the phrase suggests, the color is named for the first Breyer model to wear it, the #52 "Commander" Five-Gaiter.


Produced from 1963 to 1986, the sorrel Five-Gaiter comes in many variations. Most are a matte medium brown color with a darker brown or charcoal mane and tail with grey hooves. The body color however can range from a light cafe-au-lait shade to very dark chocolate and just about everything in between.


Though the sorrel Five-Gaiter was only ever pictured in matte in the Breyer catalogs, a handful of glossy examples are known. The mold was still available in glossy alabaster and palomino when the matte sorrel was released in 1963, so it's possible that the earliest sorrels produced were also glossy. Or they may have been factory goofs. Whatever the case, they probably date from the beginning of the run in 1963. The earliest sorrel five-gaiters in both matte and glossy often have factory hand-painted eye whites. Semi-gloss examples are also known.

Only a few models were officially released in this color, and oddly enough, they each were assigned a different name for the color. The first was the #114 "Cheyenne" Western Prancing Horse which was also first produced in 1963. Though the color is basically identical to the sorrel Five-Gaiter color, it is listed as bay in the catalog. Aggravatingly, this "bay" colorway was never pictured in the Breyer catalogs, but we know from extant models that they are generally medium brown horses with darker brown or charcoal manes and tails and grey hooves. Some have reddish tones to their color.

The #96 Shire was introduced in essentially the same color in 1972 as "honey sorrel." They differ only in that their hooves are not painted because they are obscured by the leg feathering of the mold.

This confusion may be the source of the oddball "five-gaiter sorrel" models that have turned up in a couple of runs that were supposed to be bay. The rarest and most desirable of these is the five-gaiter sorrel Fighting Stallion. Very few are known to collectors, leading to speculation over the years that they may have been a very small special run. However, the 1968 collectors manual, though sepia-toned, distinctly shows a sorrel model with grey hooves, not black.

Breyer seemed to prefer the alabaster Fighting Stallion for their catalogs, and the bay colorway does not appear again until 1972. The model pictured then clearly has black hooves.

In color photos, the difference is quite clear. The grey-hooved sorrel is a clear, lighter shade of brown while the black-hooved, black mane-and-tailed bay is a richer, often redder shade of brown. Variations of both colors exist although neither seem to vary quite as dramatically as the sorrel Five-Gaiters pictured above.

The fact that the five-gaiter sorrel Fighting Stallion was pictured in the catalog doesn't disprove that it was a small special run, but it adds credence to the idea that the color may have been a variation, accidental or otherwise. While it is possible the color was intentional, it's equally likely to have been a simple mistake. The bay Fighting Stallion had been available since 1961, and the bay Western Prancer since 1963. It's possible that someone who had been painting "bay" Western Prancers was asked to also paint some bay Fighting Stallions, not knowing that "bay" meant something different for each model. Perhaps Breyer simply decided to alter the color shortly after production began. We'll probably never know. But the catalog evidence does at least give us a rough idea of when these models were made.

The other five-gaiter sorrel models are the Family Arabian Mare, Stallion, and Foal, and while they are hard to find, they are more easily found than the Fighting Stallions.

Like the sorrel Five-gaiters, the Family Arabians vary in shade.


The five-gaiter sorrel Family Arabians can be distinguished from the bay Family Arabians not only by their grey hooves but also by their bald faces. The bays all have black hooves and stenciled face markings.

While the glossy bay Family Arabians are pictured in early 1960s Breyer catalogs, the matte versions were never shown. The change-over from glossy to matte varied depending on the model and color, but matte (palomino) Family Arabians first appear in Breyer catalogs in 1966. This likely gives us a rough idea of the production for the five-gaiter sorrel models---the mid-1960s. No examples that I'm aware of have been found with USA stamps, so they can't have been made any later than 1969. (The USA stamp was added in 1970.) And they may have been made as early as 1963 like the Fighting Stallion.

As with the sorrel Fighting Stallions, no evidence about the origins of the sorrel Family Arabians has come to light, so we don't know for sure if they were accidental variations or a special run. I personally am inclined to think they were a deliberate run of some sort since a fair number have been found by collectors. But why the run was made and who it might have been for is a mystery.

I also know of two extra special oddities from the five-gaiter sorrel Family Arabian run, a glossy version of the mare and foal. The foal is a test from the late Marney Walerius' collection. Marney was a hobbyist who did consulting work with Breyer beginning in about 1969. She was allowed to bring many test runs home from the factory, including this foal. The glossy mare was found by a collector in the Chicago-area many years ago, and it's a pretty close match to my foal. I can't help but wonder if there's a stallion out there somewhere, too! 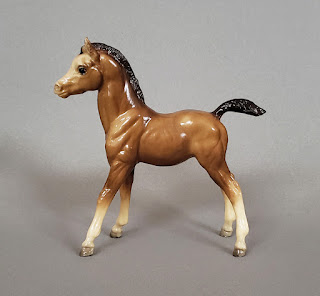