"De Mostest Hoss That Ever Was"

"The days are long at Belmont.
Speed they never learn.
And it's many a day since Man O' War
Has looped the upper turn." 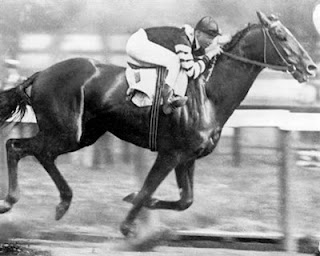 Thus begins Blood-Horse editor Joseph Estes' poem "Big Red" published in the October 23, 1937, issue of that magazine, an homage to the greatest racehorse of all time. The legend of Man O' War has inspired many such tributes in a variety of forms---literature, art, advertising, brand names, and of particular interest to model horse collectors, sculpture.

Man O' War was born on August Belmont's Nursery Stud farm near Lexington, KY, on March 29, 1917. By top runner and sire Fair Play out of the regally bred mare Mahubah, a daughter of the English Triple Crown winner Rock Sand, Man O' War was recognized early on as a quality horse by his breeder. Belmont reluctantly sold the colt, however, after enlisting in the army at the age of 65 to serve in World War I.

Samuel Riddle famously purchased Man O' War for $5,000 at the 1918 Saratoga yearling sale and raced him in his black and gold Glen Riddle Farm colors. As a 2 year-old, Man O' War captured 9 of his 10 starts with his one loss, a fast-closing second, coming though no fault of his own. (He was turned sideways at the start and was intentionally boxed in at the rail by the other jockeys for most of the race.) He carried 130 pounds, an impost usually reserved for older horses (and rarely even then), 6 times while giving away substantial weight to his rivals and beating them easily by open lengths.

At three, he was sublime and utterly untouchable, winning all 11 of his starts, including the Preakness, Belmont, Withers, Dwyer, Travers, Lawrence Realization, Jockey Club Gold Cup, and a match race against the 1919 Triple Crown winner Sir Barton.

If you read the race charts for Man O' War they all conclude with some variation of "eased final furlong" or "in a canter." Despite never being fully extended, he set three world records, two American records, two track records, and equaled another track record. And he didn't just break records by hundredths of seconds; he shattered them. In the Lawrence Realization, he shaved more than 4 seconds off the world record for 1 5/8th miles, winning by an estimated 100 lengths, both unheard of feats. His record for a 1 1/4 miles in the Travers stood for an unprecedented 42 years. No other horse in history can boast such a resume, especially when you take into account the staggering imposts Man O' War carried. In one race, he carried an astonishing 32 pounds more than his rivals. It's no surprise then that his groom Will Harbut called him "de mostest hoss that ever was."

At stud, Man O' War's brilliance continued. He sired numerous champions including Triple Crown winner War Admiral, as well as American Flag (Belmont, Withers, Dwyer), Crusader (Belmont, JCGC, Suburban), Clyde Van Dusen (Kentucky Derby), Scapa Flow (2 year-old champion), Florence Nightingale (Coaching Club American Oaks), Maid At Arms (Alabama), Edith Cavell (CCAO, Pimlico Cup over males twice), and the champion steeplechasers Battleship and Blockade. Man O' Wars daughters, in addition to being top flight runners, proved to be exceptional brood mares as well. He died at the age of 30 on November 1, 1947, and his funeral was broadcast publicly on the radio. He and several of his best offspring were originally interred at Faraway Farm under a larger than life statue by Herbert Haseltine, but in the early 1970s, the graves and statue were moved to their present location at the Kentucky Horse Park.

Man O' War was first immortalized as a collectible work of sculpture by the Grand Wood Carving company of Chicago sometime in the 1940s, probably after the great horse's death. This model is carved from mahogany, and it should look familiar to Breyer collectors. 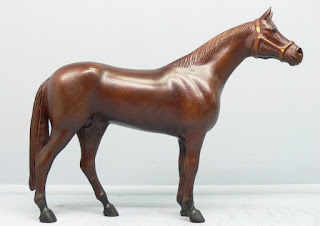 There is some evidence that Breyer sculptor Chris Hess may have worked for the Grand Wood Carving company before being hired by Breyer, but that is the subject for another post. Suffice it say, Breyer had copied the work of GWC before, and their 1967 traditional scale model of Big Red was most definitely influenced by the GWC piece, right down to the halter. This is one of the earliest variations of the #47 Man O' War with eye-whites and distinctive battleship grey hooves. 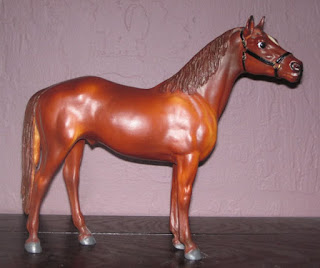 GWC produced a number of famous racehorses, many of which came on wood bases with name plaques. The idea for the Breyer Presentation Collection may have come from that practice. The Presentation Man O' War is the rarest of the traditional MOWs, made from 1971-1973 only. 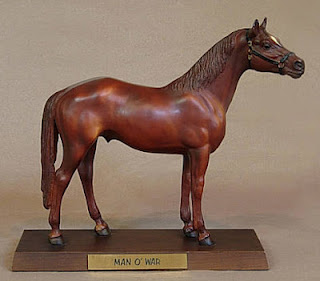 The trad MOW was produced from 1967-1995, and not surprisingly, his color varied a bit over the years. The models from the late 1980s into the 1990s have, in my opinion, always best exemplified the "look" of Big Red. They tend to be a vibrant rich red chestnut with little shading. 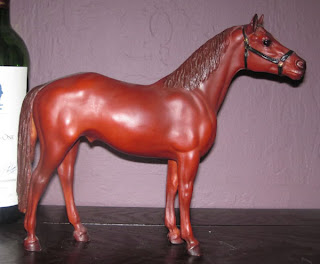 In 1990, Sears offered a very popular set of three glossy racehorses including Man O'War. Only 2000 pieces were made. 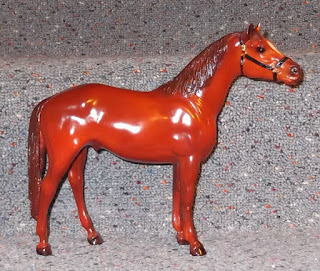 In spring of 1961, Hagen-Renaker released their Designers Workshop Man O' War sculpted by Maureen Love. Of all of the MOW portraits, hers was the truest to the physique and majesty of the real horse as the photo below will attest. The HR MOW was in production from Spring 1961-Spring 1971 and from Fall 1974-Fall 1975, so he's not an especially rare piece. He is particularly lovely, however, and a must have for all MOW fans. 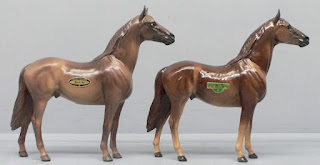 A photo of Man O' War as a young stallion. I believe this may have been the photo that inspired Maureen Love's sculpture. 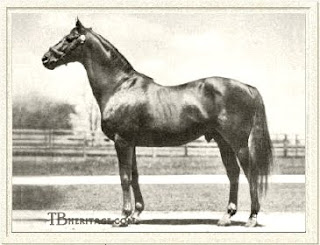 In 1975, Breyer arranged a lease for plastic production rights of Hagen-Renaker's DW Thoroughbred models, including Man O' War. The #602 Classic Man O' War model ran until 1990. Like his traditional counterpart, he ranged in color from more golden chestnut to deep red chestnut. His face marking also varied. The earliest models have a broken stripe like the model on the left, and the later ones had a star like the model on the right. The star-faced model first appears in the 1988 catalog. 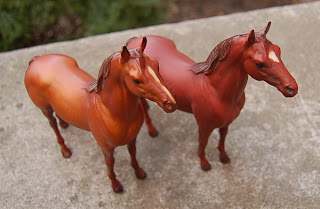 In the late 1980s, American Artists released a series of resin racehorses. Fred Stone sculpted Man O' War for them, and the pose of this model bears a striking resemblance to Fred's famous painting of the horse. I believe 2500 pieces were made. 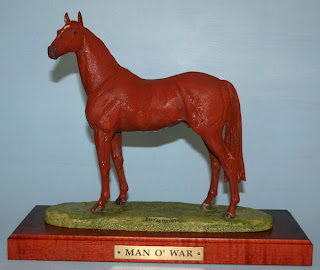 In 2004, the most recent Man O' War model was produced by Starlite Originals, sculpted by Kitty Cantrell. It was limited to 2500 pieces. 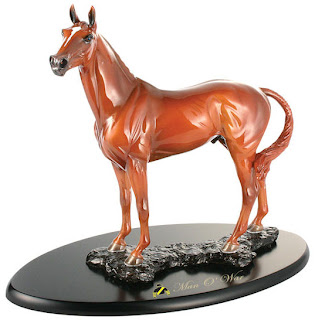 As you may have guessed, I have been a lifelong, die-hard fan of Man O' War. One of my earliest memories is of my dad reading C.W. Anderson horse books to me, and MOW was, rightfully so, the benchmark by which Anderson measured all other horses. So it's only fitting that I painted by my own Man O' War on Carol Williams' incredible Valor resin. While Valor is a mega-popular model, I don't think my guy is exactly collectible other than to me, but how could I not include him? 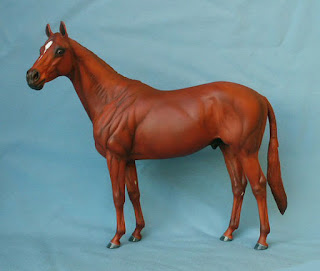 "We watch the heroes parading,
We wait, and our eyes are dim,
But we never discover another
Like him."

Posted by Kirsten Wellman at 8:46 PM No comments:

What exactly constitutes ephemera? Dictionary.com gives this very apt definition: "items designed to be useful or important for only a short time, especially pamphlets, notices, tickets, etc." In terms of model horse collectibility, that includes things like hang tags, stickers, accessories, original packaging, and catalogs---things that most people threw away or things that were lost because they were small and not integral to the piece. Each of these subjects deserves its own post (and the discussion of boxes in particular may span several blog entries), so this post will begin the subject with a discussion of hang tags.

While a variety of modern models are sold with hang tags, particularly Breyers, vintage hang tags are some of the hardest pieces of ephemera to find. Most buyers removed them from the models to facilitate play or display, and the tags were thrown away or lost over the years. In most cases, regardless of manufacturer, very few vintage hang tags are known to still exist, making them highly desirable to collectors. Most hang tags are made of paper or card stock, but a few were made of less traditional materials. I've included some examples below.

This is Breyer's Robin Hood on a white Fury Prancer with all original accessories and the original paper hang tag. This set dates from the late 1950s. 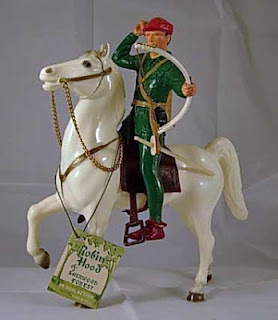 This Breyer Woodgrain Buffalo is one of about 3 known, all of which are on lamps. This fellow has the original leather and twine "Ranch Craft Originals by Dunning Industries" hang tag. The lamp dates to the mid 1960s. 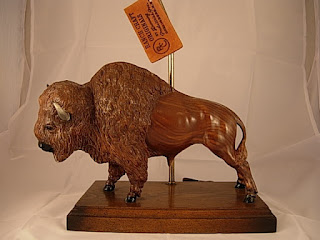 This Breyer Little Bits Saddlebred is a SR from 1985. The hang tag, which describes Breyer's new partnership with Reeves International, identifies her as one of the first 500 pieces from the SR that were only distributed at the New York Toy Fair. A number of sorrel Saddlebreds were distributed sans hang tags at Breyer events in 1990-1992, making the models with tags more special. 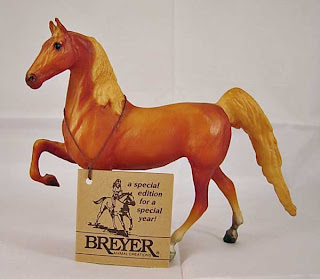 Breyer's Susecion and Le Fire set is only about 10 years old, but they have become hot items amongst newer collectors lately. Sets with the original hang tag are consistently commanding higher prices. 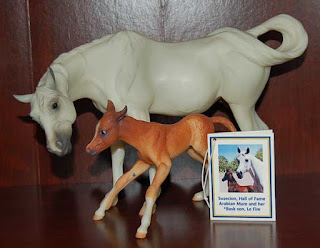 Peter Stone horses rarely come with much in the way of ephemera, making this Chips model pretty unique. He is part of a run of 50 models given to entrants of a Stone show near Chicago in 2006 by way of apology for the show not being a NAN-qualifier as originally advertised. 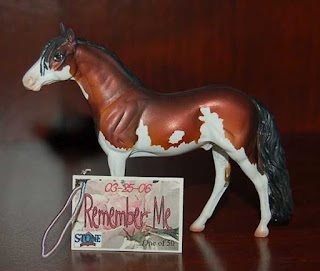 Hang tags for china models are fairly uncommon regardless of age. This Beswick Welsh Mountain Pony by itself is not rare, but the little paper tag is pretty scarce. 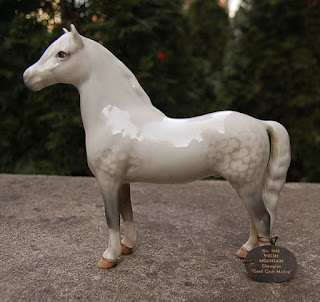 Hagen-Renaker's Nataf is a highly desirable piece both for halter and collectibility showers. Finding one with a hang tag makes it all the more special. 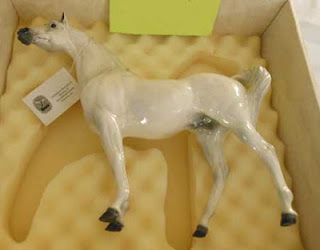 These whimsical pieces by Walker-Renaker are not especially rare, but they are hard to find with all of their flowers and bows intact. The hang tags with the cute names add to their charm and collectibility.

This Rosenthal Small Polo Pony, already a rare piece and an old one (circa 1916), has a hang tag unlike any other I've seen. It's a small gold-colored metal plate that reads "Ertos" that is attached around his right rear leg with a small chain. Not surprisingly, he is always a strong contender in the collectibility show ring. 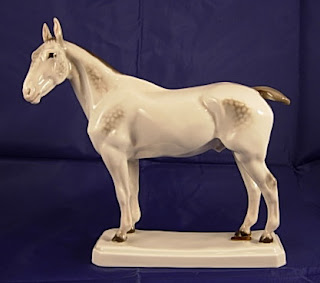 A close up of the tag. 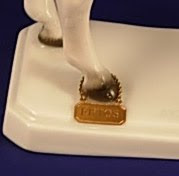 Not only are they fun and interesting pieces of history, but hang tags can also give a collectibility entry a little extra "oomph" in the show ring. They can be the added edge needed to make a model stand out in a crowd.