Back in 2002, someone who attended the Bring Out Your Chinas event in southern California posted an album of photos to HayNet. BOYC was a gathering of all of the serious china heads in the hobby, and there were some incredible models on display. I poured over the photos, amazed by the variety of makers and exquisite horses. One of the pieces that really struck me was an Albany Fine China portrait of the great steeplechaser Desert Orchid. I had never seen one before and was dazzled by his dynamic galloping pose and substantial size. At 12 inches measured from hoof to eartips, he's on a scale with other enormous china pieces like Hagen-Renaker's Nataf.

At the time, I only dabbled a bit in chinas. I had a small collection of Hagen-Renakers, and I was familiar with Beswicks, Royal Worcesters, and some of the German makers, but Albany was largely a mystery. (Even now with all the power of the internet at our finger tips, there isn't a great deal of information to be had about the company or its products.) Still, I resolved to find an Albany Desert Orchid for my collection if I could.

Surprisingly, within a few months, I stumbled across a custom glazed Desert Orchid on eBay. He had been glazed by Lyne Raff to a rich chestnut frame overo, and as a fan of Thoroughbreds, especially colorful ones, I had to have him. (Lyne has since left the hobby, but she was a well-known customizer and sculptor with a deliciously quirky sense of humor.) 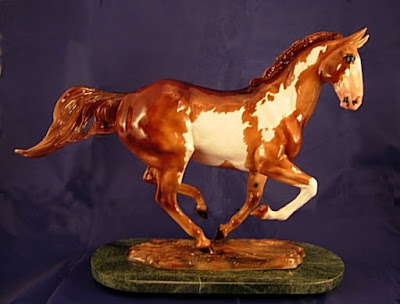 A short time later, an OF Desert Orchid came up for sale on eBay, and my sister had by that time fallen in love with the piece as well, so he quickly joined her collection. (We suspect this is the piece that was at BOYC.) 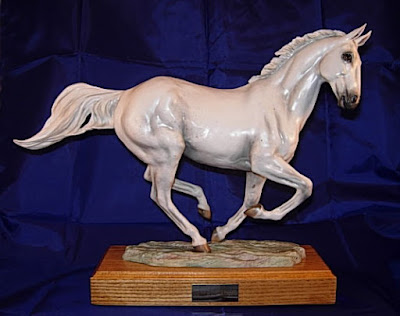 In retrospect, we both feel fortunate to have acquired our Dessies when we did because Albany horses, particularly Desert Orchid, have proved to be quite scarce over the years. Having done some research on the company for this blog, I finally know why.

The company was founded in 1972 by three former Royal Worcester employees, and they made a variety of porcelain figurines---people, horses, dogs, birds, etc. They made several famous racehorses including great English champions like Mill Reef and Brigadier Gerard as well as a few pieces representing various breeds like a Thoroughbred, Arabian, Palomino, Welsh Pony, and Tennessee Walker. As far as I know, all of the horses were sculpted by David Lovegrove except for Desert Orchid which was sculpted by Lorne McKean. The horses were intended to be produced in limited runs of 100 to 500 pieces, but given their scarcity, most collectors and dealers agree that none of the runs were ever completed. In fact, I've seen estimates of 50 pieces or less for some of the the horse molds.

There are several factors that contribute to the rarity of these models. One is undoubtedly their size; large ceramic pieces are prone to slumping when molded or fired. The complexity of poses is also challenging. Mill Reef and most of the others are at least balanced with "a leg at each corner" as Thelwell so aptly put it, but Desert Orchid rests on only two small points of contact. I have not been able to find good information on production dates for the horses, but based on articles and ads I read in a British newspaper archive, most of Lovegrove's horses were available by the end of 1973. How long they were actually offered beyond that is anyone's guess. After the late 1970s, the only references to Albany pieces I have been able to find refer to the dogs, and more often the birds, rather than the horses the company produced.


Desert Orchid is most definitely an outlier, both in terms of who sculpted him and when he was made. The real horse was foaled in 1979 and didn't reach the zenith of his career until the late 1980s, retiring finally in 1991. Even if Lorne McKean sculpted the piece for Albany while Dessie was at the height of his fame, the piece couldn't have been ready before 1990, nearly 20 years after the other horse molds were released. However, it seems more likely that the Desert Orchid model wasn't released until after the horse retired, so probably 1992 at the earliest.

Which brings us to the primary reason that Dessie is so rare. In 1995, Albany suffered a catastrophic fire at their Lowesmoor factory. Sadly, some of the horse molds were destroyed in the conflagration.
With all that in mind, it's not surprising that my sister and I saw only one other OF Albany Dessie in the intervening 15 years since we purchased ours. And that one was already in the hands of another collector. (Interestingly, if you click on the link, you'll see that that Dessie is positioned in a more upright pose and has slightly different shading and coloration than my sister's piece pictured above.)

Then, out of the blue in the summer of 2017, another custom glaze Desert Orchid came up for sale as part of a collection dispersal sale. This one had been glazed to a soft dapple grey by Anthony Tomson, an extraordinary artist who got his start working for Royal Worcester. His glaze work is quite rare and highly sought after. Needless to say, my sister went for broke to acquire it. 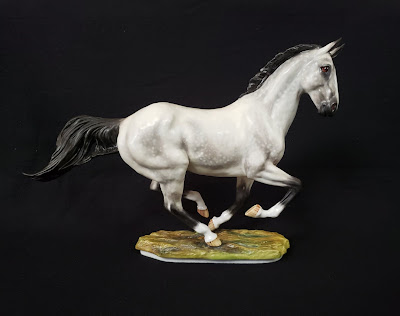 By that time, I had more or less resigned myself to never finding an OF Desert Orchid for myself. The likelihood of me acquiring one, especially at a price I could afford, wasn't high. I still wanted one for sure, but I was content to live vicariously through my sister's OF piece.

Of all of the crazy things to turn up at an estate sale in Georgia---which is a veritable wasteland for model horse liberations, especially china horses---an OF Albany Desert Orchid appeared in a sale listing for an upscale Atlanta neighborhood not far from where my sister lives. Needless to say, I frantically called her to see if she could go check it out. Being the awesome person that she is, she got the morning off work (her boss thinks we're really weird now) and rolled out at the crack of dawn to wait in line for the sale. Given how expensive the house was (it had just sold or $2.75 million) and how classy and obviously expensive the decor was, we were worried that Dessie might be priced pretty high. We agreed to a budget and crossed our fingers. Luck was with us though and I was thrilled to receive a text from my sister shortly after the sale started that read, "I GOT HIM!" 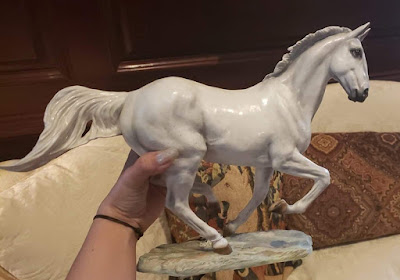 My Dessie's former owners were British, and they had a great deal of other horse art that was not part of the sale, so we think they may have had a connection to racing in England. Perhaps they were part of a syndicate or maybe they were just ardent fans? Whatever the case, this fellow brings the tally of Albany Desert Orchids known to me up to 3 OFs and 2 custom glazes. I wonder how many others might be out there lurking in the collections of Thoroughbred fans or owners?


P.S. Anyone looking to sell an Albany Mill Reef? I need one. :D

(Addendum: After I posted this blog, I was delighted to hear from Lyne Raff who is still in fact dabbling in the hobby. Hopefully, we'll see some new customs from her in the future!

Also, I was thrilled to learn that the Desert Orchid mold survived the conflagration at the Albany factory and is now owned by a popular hobby china maker. At the moment, she does not have a kiln large enough to accommodate Dessie, but at least he exists and may see production again someday.

And at least 1 or 2 more OF Dessies have surfaced, so hope springs eternal for collectors looking to acquire one!)