The best week ever

On June 6th, American Pharoah raced into the history books with a five length romp in the Belmont Stakes, securing the first Triple Crown victory in 37 years. As a lifelong horse racing fan, his win was an incredible thrill that I will never, ever forget. I shrieked, I cried, and I rewatched the race over and over that week. It still gives me chills---it always will.

The following Friday afternoon, still happily buzzed by an event I had begun to despair I would ever witness, I found myself noodling around on the internet and chatting with my mom. She asked me to take another look at an item that was part of the Hagen-Renaker archives estate dispersal, and as the eBay home page loaded, it flashed up a group of suggested auctions based on my interests and buying habits.

My heart nearly stopped as I glanced at the most recently listed items. There, staring me in the face with a buy-it-now of $15.99, was a random horse-shaped-object paired with my holiest of holy grails, a woodgrain Proud Arabian Foal. My hands went clammy and started to shake, but my fingers flew across the keys and completed the sale in seconds.

The few days that followed waiting for USPS to deliver the box felt like the longest I'd ever endured. I was terrified the foal would somehow be lost or misdirected or broken in transit. On Tuesday of the next week, the box was listed as out for delivery, and I was on edge all morning waiting for the mailman to reach my work place. Just after lunch, I heard the telltale rattle of a hand truck exiting the elevator. I grabbed my key to the mailroom and flew up the stairs. Sure enough, my box was waiting. 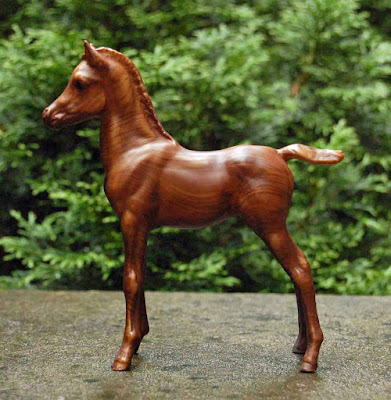 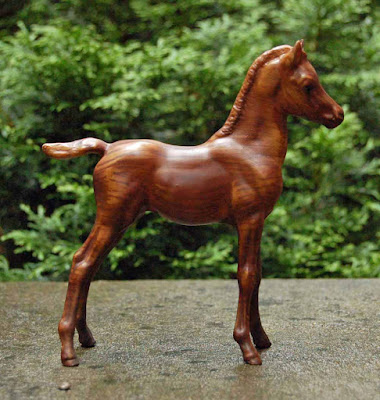 My family has had some amazing luck finding rare models over the years in flea markets and antique malls, but this little filly is hands down the best find of my life. I can still hardly believe it. Somebody pinch me!
Posted by Kirsten Wellman at 6:44 PM 1 comment:

Here is the first question and answer from the sample Breyer collectibility test I wrote about in my last post.

When I posted the list of test questions on Facebook, I was bit disappointed to see some responses from collectors who couldn't understand the importance or relevance of this question. In my opinion, how can a person understand the collectibility of the models a company has produced if they don't have a fundamental understanding of the history of the company and the events that drove the changes to its product line?

Knowledge of Breyer's history is ultimately how we determine rarity after all. This question serves to provide a basic, baseline point of reference to determine how knowledgeable a judge is likely to be about the finer points of collectibility. In my opinion, anyone who wishes to judge Breyer collectibility should be able to reel off the answers to this question quickly and easily.

They are as follows:

1960 - General introduction of round Breyer stamp

1964 (approximately) - Decorator era (For sure they were available in 1964 as we have a price list and sales sheet from that year listing them. They may have been available as early as 1963. The decos however were duds and were likely discontinued at the end of 1964 after poor sales.)


Next time, a look at some of the molds that Breyer copied from other manufacturers.
Posted by Kirsten Wellman at 7:46 PM 2 comments: