Learning about collectibility can be a daunting prospect, especially to new collectors. The sheer volume of information to digest about mold marks, variations, special runs, stickers, and sundry other minutiae can be overwhelming. Thankfully, a number of terrific resources are available to collectors. 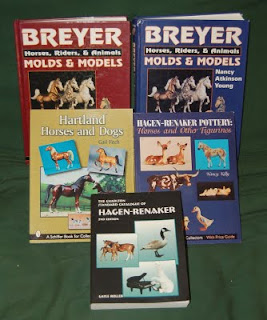 Breyer
The most important book for Breyer collectors wishing to learn more about Breyer collectibility is Nancy Young's Breyer Molds and Models. Her last edition only covers production from 1950 through 1997, but no other book has the sheer volume of detail. Nancy covers every possible variation of mold, color, and markings, as well as interesting trivia on the origins and inspirations for many pieces. She discusses not only the horses, but also the animals, riders (both hard plastic and pose-able), dealer and collector catalogs, tack, stickers, hang tags, lamps, clocks, night lights, music boxes, and much more. It is a treasure trove of fascinating information and a must-read for any collectibility fan. (The values listed can be ignored as Nancy's intention was essentially to write a Breyer encyclopedia rather than a price guide.) Nancy's book is, alas, out of print, but it can be found on eBay regularly for anywhere from $20-50. Amazon reseller usually want at least $100 or more.

The Breyer Animal Collector's Guide, originally published by Felicia Browell and now updated by Kelly Weimer and Kelly Kesicki, makes an excellent companion guide to Nancy's encyclopedic tome. The guide offers color pictures of almost every Breyer model produced including many oddities, and it offers values based on recent average selling prices. It is updated and reissued every few years with the latest one having been published in 2008. It's a very handy guide for keeping track of the multitude of new models that are released every year, and a new edition is in the works. This book can be purchased directly from the Breyer website.

In this age of smart phones and lap tops, online resources can be handy for on-the-go references as well. Identify Your Breyer and Ponylagoon are the two best sites, with IDYB being the most complete.


Hartlands
Gail Fitch has been researching and writing about Hartlands for nearly 30 years, and her books on the subject reflect her dedication. Hartland Horses and Dogs and Hartland Horsemen are her most recent books, and both cover Hartland pieces from the 1940s until 2000.

HH&D covers the models that were meant to represent various breeds that were never issued with riders. Gail includes the many sizes, from the Regals to the Tinymites and everything in between. She also includes the horses from the various different companies that produced Hartlands, such as Durant, Stevens, and Paola Groeber's Hartland Collectibles. (The book does not include the models produced in the 2000s by Sheryl Leisure.)

HH, as the title suggests, covers the horse and rider sets produced by Hartland, the standing gunfighters, their miscellaneous accessories (hats, guns, etc), as well as the horse molds intended for riders that were occasionally produced without them.

Both books include information about packaging, paper ephemera, stickers, and the like, and both have color photos of nearly everything Hartland has produced, including oddities. They are available for purchase on Gail's website.


Peter Stone Horses
Though the Peter Stone company has only been making models in earnest since 1997, literally thousands of different models have already been issued. The Stone company started out with regular production runs, but these days, they specialize in small editions and one-of-a-kind models, making it difficult to keep track of the many, many different horses that have been produced. At least one book, the Illustrated Value Guide to Peter Stone Horses, has attempted to do just that, but no recent editions have been published. The best way to learn about Stone Horses is via the Stone Horse Reference web site maintained by Barb Spohr.


Next installment...china horses!
Posted by Kirsten Wellman at 8:30 PM No comments: