I promise I will get back to my collectibility judging test series in the near future, but in the meantime, here are some thoughts on judging in general inspired by a recent Facebook conversation. It's a subject I've wanted to tackle for a while, but I've kept it on a back burner because other (easier) subjects were at hand. This is going to be a long post and possibly a bit rambling in places, so I've done my best to break up the text with hopefully relevant (or at least interesting) photos. What I discuss here can be applied broadly to most show divisions, but it's especially relevant to OF breed classes and collectibility classes.

I recently had the pleasure of judging at Breakables, a china show sponsored by Breyer and held in conjunction with BreyerFest in Lexington, Kentucky. I have showed several times at Breakables, but I had never judged there until this year, so it was a fun change of pace to be on the other side of the clipboard, so to speak. Breakables is always an enjoyable show because the clinky community is relatively small and close-knit, so rather than a competition, it often feels more like a show-and-tell session among friends. (Which it pretty much is.) 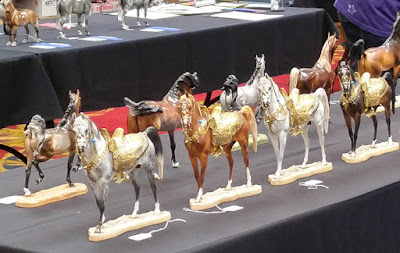 The show was extra fun for me this year because my sister Sarah judged with me. Sarah is a long-time collectibility shower and collector, but she hasn't had the opportunity to judge a lot, so the show was a great experience for us both. In the week leading up to BreyerFest, just to get our heads in the game, we spent some time chatting about judging procedure and what to expect on practical matters like calling and closing classes, remembering to put out NAN cards, what order to lay down ribbons (I like last to first, personally), etc.

The most important thing we discussed was judging philosophy, both in terms of what our criteria are for picking winners, but also how we approach a class and sift through the models on the table to find those winners. In other words, what we felt constituted good and effective judging. For me, this boils down to two things: 1) time management, and 2) well-informed judging criteria.

Time management sounds simple enough but it is absolutely crucial to a smoothly run event and happy showers. Live shows these days regularly have extensive class lists that start early in the morning and can run well into the evening. Speaking from experience, late-running shows can be exhausting for both judges and showers. To make sure I keep the divisions I judge moving along at a reasonable pace, I have literally started doing the math---I count the number of classes I'm responsible for and measure that against a reasonable finish time for the show. For example, a show I judged several years ago had 55 OF Breyer classes. Based on a start time of 9:00 AM with a goal to be done by 5:30 PM (so we could all go out to dinner together) while also factoring in an hour for lunch made for approximately 7.5 hours of judging time. That translates to only 8 minutes per class which includes not just looking at the models but also writing down the results, laying down the ribbons, announcing that the class has been pinned, calling the next class, and waiting for entrants to pick up their models and replace them with new ones for the next class. Not to mention periodically squeezing in a few extra minutes to pick sectional champs! That's a LOT of action to cram into a small amount of time. Of course, some classes will be small and easy to judge quickly in less than the allotted time, but popular classes like Arabians or Quarter Horses will likely be large and take up more than the allotted time.

Therefore, it behooves a judge to know exactly what their judging criteria are for a given division, i.e. anatomy and biomechanics for breed classes or rarity and age for collectibility classes, in order to optimize their judging time. And while this seems like it should be fairly straightforward, it can be be fraught with etiquette landmines. Very often, judges are given the advice that they should carefully examine every model on the table, for the obvious reasons of course, but also in part so that no entrants can accuse them of overlooking their models, deliberately or otherwise. On the surface, this seems like reasonable advice. Showers pay good money to travel to shows---gas, lodging, entry fees, etc---so as judges, we should give all models equal consideration and time, right?

Well, yes and no.

The mark of a good judge in my opinion is one who can look over a table of models and quickly have an idea of which ones will be the top picks before giving them all a closer look. In fact, a really good judge will already have some idea of what models are likely to be in a given class and will be mentally sorting them before the class is even called. With this in mind, and given the time crunch of finishing at a reasonable hour, it is not the best use of time to expect the judge to look minutely at every model on the table. A quick once-over will suffice for the models that are not strong contenders, allowing the judge to allocate more time to the best models in the class.

For example, the average OF Breyer Arabian class would likely have a mix of molds in various colors---Proud Arabian Mares, Justadream/Make A Wish, Weather Girl, Huckleberry Bey, Sham, Yasmin, the Love Classic Arabians, and probably a variety of stablemates by Love, Moody, and Lunger. A knowledgeable breed judge will immediately focus on the Love and Eberl molds for the top ribbons because they are much more anatomically correct than the others. If there are not enough of those models to fill out the placings, the judge then moves on to the next most correct (or least flawed, depending on your point of view) model.

Similarly, a collectibility class can be sorted into potential winners and models less likely to place fairly quickly as well. In a Breyer Woodgrain class, for example, the rarest models---Proud Arabian Mares, Furies, Belgians, etc---will be considered and placed before moving on to the more common Fighting Stallions or Family Arabians. 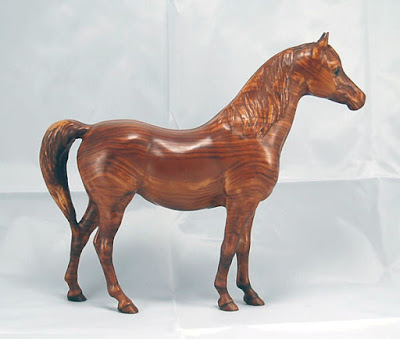 These examples are simplifications, of course, because not every class will have obvious stand outs or sometimes the stand outs will have some flaw that may knock them out of contention (warped legs, rubs, poor restoration, etc). And of course, this method of finding winners while also managing one's time in an efficient manner is more applicable to some divisions, such as OF plastic, than others, like customs. But the basic tenets can be applied in some fashion to most divisions. In custom or resin classes, bodies with known, uncorrected anatomical flaws are fairly easy to sort out from the more correct sculptures. Likewise, inaccurate colors or patterns are also easy to spot and dismiss.(Performance is a division I have very little experience judging, so I will leave that subject to more knowledgeable bloggers.)

The ability to narrow down a class quickly based on the criteria described above may seem surprising and even intimidating, especially to newer showers and collectors, but it is something that can be learned with patience and experience. In the past, this method of judging has prompted arguments that showers shouldn't even bother bringing certain molds to shows anymore because they won't place. "We should just all agree upon a ranked list of molds and be done with it!" they say sarcastically. "Pick your mold, place it by your favorite colors, and then move on to the next mold. Why even bother showing?" It's an old argument, one I've heard since I got started in the hobby in the late 1980s, and I'm sure it predates me by a number of years. And while I will always advocate that a person buy and show whatever they like, I'll come right out and say it: yes, certain molds are more correct than others, and the less correct molds should not place over them. I love Sham as much as the next girl (truly), but he has no business placing in a breed class when there are Eberl and Love molds on the table. We may not have a hobby-wide list of molds ranked by anatomical correctness, but I have one in my head, and every competent, knowledgeable judge does, too. It's the only fair (and sane) way to maintain consistent criteria while judging.

Before I wrap this up, I will add that it should go without saying that fast judging does not necessarily equate to good judging. And likewise, a judge who deliberates over a class for 30 minutes minutely examining every model may be doing so because he or she does not yet have a firm idea of their judging criteria, and they're looking for simple and expedient (but incorrect) ways to weed out a class (i.e. dust between the ears or tiny hoof rubs).

With all of this in mind, don't feel discouraged if you're reading this and worrying that you don't yet have a solid idea of how to sort a class into potential winners and models less likely to place. We all have to start somewhere, and becoming a good judge takes practice, good observation skills, a willingness to listen and learn, and hopefully, friendly hobby mentors to help learn the ropes. It doesn't happen overnight, and we all make mistakes along the way. I know I have some cringe-worthy placings in my past!

Showers should also always remember that judges are volunteers who give up their free time and sometimes their own chance to show to help others hold successful shows. Showers absolutely can ask judges about their placings in a polite and respectful manner, and judges in return should be prepared to answer such questions with an explanation of how their judging criteria was factored into their placings. Dialogue between judges and showers can be a learning experience for both.

Thanks for reading!
Posted by Kirsten Wellman at 6:26 PM No comments: