"How I can tell if my PAM is Old Mold or New Mold?"

If you've been in the hobby for any length of time, you're bound to have been asked this question. You've probably even asked it yourself at some point. It's a common query, and one that is surprisingly easy to answer given the amount of confusion it has generated over the years.

Simply put, if your Proud Arabian Mare is Glossy Alabaster, Glossy Bay (honey bay, not mahogany), Glossy Appaloosa, or Woodgrain, it's Old Mold. If it's any other color color, it's New Mold. Easy and straightforward, right? So why the confusion? And why are there old and new versions of the mold anyway?

In spring of 1957, the California pottery company Hagen-Renaker released their large Designers Workshop Arabian family sculpted by Maureen Love. By 1958, Breyer had released plastic copies of the mare and foal (with the stallion entering production in late 1958 or early 1959), but for the purpose of this post, we're only going to look at the mares. HR dubbed their mare "Zara," and Breyer named their mares Pride (alabaster), Sheba (bay), and Speck (appaloosa). (The Woodgrain PAM was never given a name.)

(HR Zara on the left courtesy of Ed Alcorn's HR Online Museum/Breyer Glossy Bay OM PAM on the right)
As you can see, though they are not identical, the mares are decidedly similar. Not surprisingly, Hagen-Renaker sued Breyer in 1959 for copyright infringement and won. Production of Breyer's Proud Arab Mare mold ceased by the end of that year.

With that in mind, we know that the Glossy Alabaster color was available in 1958, and the Glossy Bays were in production no later than 1959, but the Glossy Appaloosa and Woodgrain colors were only produced for a short time in 1959, hence their far greater scarcity.

Old Mold Woodgrain, Appaloosa, Bay, and Alabaster PAMs
For about 12 years, the Proud Arab Mare mold languished unused in the Breyer factory. Then in 1971, Breyer renegotiated a deal with Hagen-Renaker to produce the model again. According to Marney Walerius, hobby matriarch and one-time Breyer advisor, the part of the mold containing the PAM's left foreleg was somehow lost over the intervening years and had to be recast. The mares produced from 1971 on are thus considered the New Mold PAMs. The recast foreleg was flawed, however, and most New Mold mares toe out noticeably from the knee down. 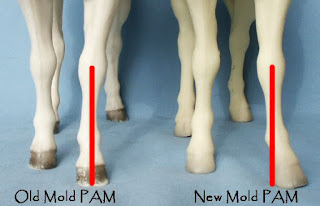 New Mold PAMs also differ from Old Mold mares in that they are marked with the round Breyer Molding Company stamp and nearly all have the USA stamp as well. (It's often faint on the earliest New Mold mares.) In contrast, the Old Mold mares have no mold marks at all.

Lastly, most of the New Mold mares issued from the mid-1970s until the mold was discontinued in the mid-2000s have a bump on the back of their right front cannon bone. On some mares, it looks like the filling caused by a bowed tendon and on others, especially later mares, it's an obvious raised lump. 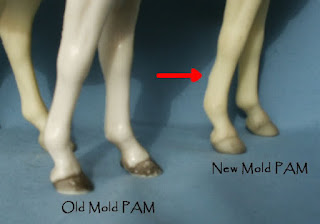 So there you have it. While there are physical differences between Old and New Mold PAMs, the easiest way to identify them is simply by color. Stay tuned for a post about the weird history of the Proud Arab Mares, In Between Mares, and Family Arab Mares!