My dad travels a lot for work, and about 20 years ago, he came home from a trip with a special find. While on the road, he stopped for lunch and then decided to look through a nearby antique mall. When he arrived at the house later that evening, he came up the front steps grinning and said he'd found "a decorator." And he was right. It wasn't a Breyer decorator, but it was a gold Hartland 9" Mustang which was just as exciting. We didn't know much about it at the time, but eventually we learned that it had been made as a special run for a brewery. It was meant to be affixed to a sign that would have been on display in a bar.

For most of the intervening years since then, I focused mostly on collecting Breyers, but I happily bought old Hartlands when I could find them at reasonable prices. I've always liked their stylized look, especially the horses made in the 1960s, and for the last few years, I've been actively filling in gaps in my collection of horses from that era. I've also been filling in the gaps in my knowledge about Hartlands.

So, in my post about Hartland woodcuts earlier this summer, I mentioned the elusive gold woodcut 9" Mustang and included a photo of a partial set I found on Google.  According to Gail Fitch's book Hartland Horses and Dogs, the gold Mustang was issued as a special run in the late 1960s for the Mustang Malt Liquor company in Pittsburgh, PA. No one knows how many were made or even exactly when they were made, but the horses are found often enough off the beer sign that I suspect there are a reasonable number to be had. Finding models still on the beer sign and with the original beverage container is however much more unusual. I see horses with the bases only very occasionally and complete sets hardly ever. So that said, I was really pleased to be able to add this set to my Hartland collection. 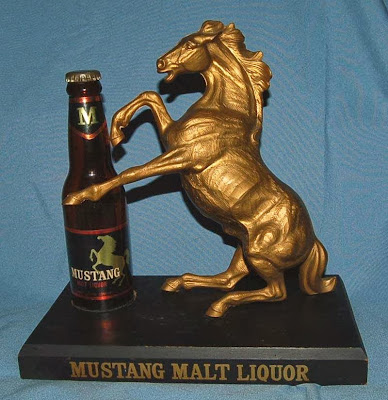 Unlike the other Hartland woodcuts which were molded in colored plastic, this model is molded in white plastic and was then painted gold. The base on this example is lettered on both sides, but some are only lettered on one side. I believe the piece was meant to come with the empty glass bottle as shown here, but I have seen at least one with an aluminum can instead. I'm not sure if it came both ways or if the can was a replacement for a presumably broken or lost bottle. Either way, it's a fun bit of breweriana and Hartland history.
Posted by Kirsten Wellman at 9:43 AM No comments: