The White Horse of Uffington

"Beneath my hands the planes
Of his bleached shoulders move,
And the bow of his neck bends to the flint-shaped head.
I ride the chalk-white horse
That moves over bone-bare hills,
And from his streaming mane time falls away.

Between the thighs of kings
Who are now chalk-bare bones
His ancestors, the stallion-herds once strode,
Who, bending their bird-beaked heads,
Are now a shrinking scar
Across the downs from which time ebbs away."
~ Margaret Stanley-Wrench, 1958

About 20 miles southwest of Oxford, England, on a line of rolling green hills, an ancient 360-foot long white horse strides across the landscape. For nearly 3,000 years, the highly stylized chalk-cut horse has guarded the Vale of the White Horse and the Iron Age hillfort just beyond it on the top of the hill. The White Horse of Uffington is one of many figures cut into the hillsides of England, but it is by far the oldest of them all.

The White Horse of Uffington has long been a source of mystery and wonder for locals and travelers alike. Its origin and meaning have remained shrouded in mystery for centuries with various theories about its creation put forth by succeeding generations. The earliest know mention of it can be found in a medieval Welsh text which referenced only the fact of its existence, and that in passing. Seventeenth and eighteenth century gentlemen scholars speculated that Hengist and Horsa, the brothers who led the invasion of England by the Angles, Saxons, and Jutes in the fifth century AD, had carved the horse to commemorate their victory.Others claimed that King Alfred the Great had dug out the horse four centuries later to celebrate his own victory over Viking invaders. A few later scholars, aware of similar equine designs found on Celtic coins, correctly surmised that the horse likely predated the presence of the Romans in England in the first century BC at the very least.
Modern archeological methods however have proven that the horse is far older than Alfred or Hengist and Horsa or even the Romans. Unlike other chalk figures in Britain which were created by just scraping off the turf and lining the soil with chalk, the White Horse of Uffington was deliberately dug about three feet deep, and the resulting trenches were filled with crushed chalk. Using optimal stimulated luminescence, a method of measuring when soil was last exposed to sunlight, archaeologists have thus dated the horse to the late Bronze Age or early Iron Age, somewhere between about 1300 and 600 BC. The hill figure is therefore usually attributed to the Celts, though interestingly, it is situated in a landscape littered with earlier Neolithic and Bronze Age sites. Uffington Castle, a classic Iron Age bank and ditch hillfort, sits just out of frame to the right in the photo above. Neolithic long barrows, sarsen stones, and prehistoric trackways can be found scattered throughout the area within a mile or two of the horse as well. It seems likely that the site may have been chosen because it already held great cultural significance to the people who lived there before the arrival of the Celts.

The figure of the horse has been scoured by locals for almost thirty centuries to keep it from becoming overgrown. Stratigraphy of the area immediately around the horse has shown that while its beak-like mouth has shifted in position a bit over the millennia, the general outline of the horse has remained true. It has always been a highly-stylized image of a horse rather than the remains of a more realistic figure.

As I mentioned above, it is located a short distance from Uffington Castle, and while hillforts absolutely served a defensive, militaristic purpose, they were also active centers of farming, storage, and trade. Excavations of hillforts have revealed dwellings, granaries, and animal pens within the ramparts. With that in mind, the notion that the White Horse symbolized some great victory in battle in the past may have some credence, but given the multi-purpose function of hillforts and the role of the horse in Celtic life and mythology, it seems much more likely that there may have been a religious or spiritual purpose behind the creation of the White Horse.

The Celts revered horses, considering them a symbol of high status and wealth. Horses were used as riding animals for hunting, as draft animals to pull carts, as war horses to pull chariots, and sometimes as sacrificial animals as well. The earliest princely Celtic cart burials date to around the seventh century BC and chariot burials appear a few centuries later. Classical writers like Caesar mentioned the great skill with which the Celts drove their chariots and rode their horses in cavalry charges. Images of horses abound in Celtic art adorning coins, sculpture, jewelry, drinking vessels, sacred objects, and more.

Likewise, Celtic religion and mythology is full of horses, often white horses. Epona, the "Great Mare," whose very name is derived from the Celtic word for horse, was a goddess of horses and fertility and the cycle of life. She was usually depicted as a woman riding sidesaddle on a mare with a foal at their side, a symbol of fecundity. Worship of Epona sometimes included an aspect of death as well, portrayed in sculpture as the goddess leading a horse and departed souls into the afterlife. Epona was originally a deity of the Celts of Gaul, but so great was her popularity that her worship spread to various Celtic tribes along trade routes into Britain, Germany, and elsewhere. The Roman cavalry even claimed her as their patroness, and the cult of Epona was spread across the length and breadth of the empire.

The Welsh goddess Rhiannon and the Irish goddess Macha bear strong similarities to Epona though their stories in the Mabinogian and the Táin Bó Cuailnge must be interpreted through a veneer of Christianity. (The Celts had no written language, so most of their stories were not put to the page until monks did so in the early medieval period.) Both however have strong associations with horses, fertility, and the cycle of birth and death. The Welsh and Irish myth cycles are rife with tales of horse races, magical horses, shape-shifters who become horses, and so on. Celtic life, both in reality and mythologically, revolved around horses to a great degree.
As I wrote in anticipation of the Celtic-themed BreyerFest last year, I've been fascinated by Celtic mythology and culture since I was a kid. As a lifelong horse girl to boot, I long ago took the White Horse of Uffington as a kind of personal totem. It's the perfect representation of my main passions in life, hence my studio name and logo. So you can imagine my intense nerdy delight when Breyer announced Uffington as a special run this year. He is a lovely shaded iridescent cremello on the new Altynai mold, and he is magnificent. His striking pearly finish perfectly captures the unique metallic sheen so often seen on Akhal-Tekes. 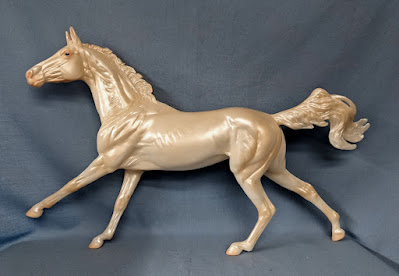 I ordered two Uffingtons, planning to keep the better of the two and repaint the other. Breyer however had sneaky plans afoot, and the first Uffington I received was actually this incredible holographic pewtery-black model. All of the special runs this year had secret variations, this one being a run of 200 pieces made in addition to the 1800 cremello Uffingtons. He's the first rare variation BreyerFest special run I've ever pulled, and I am beyond thrilled with him. 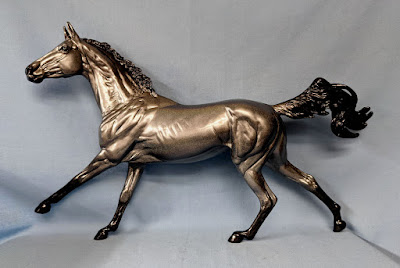 I can't get over how gorgeous these two are together. All of the surprise variations this year were stunning, but this one is definitely my favorite. 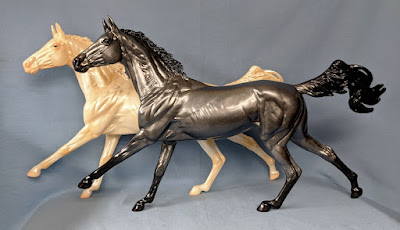 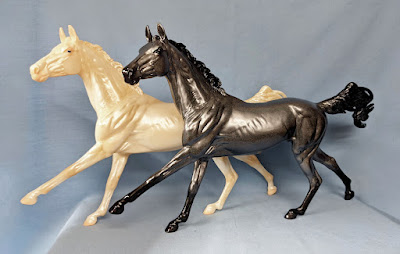 Seeing this pair of Uffingtons galloping together puts me in mind of two of the most famous horses from Irish mythology, those that pulled the chariot of the great hero Cúchulainn. Legend says that he found the two horses in a mountain pool, a gift to him from the goddess Macha. Cúchulainn rode the horses around Ireland for a day until they were tame, and then they became his prized chariot horses who were loyal to him until the bitter end. The horses, Liath Macha and Dub Sainglend, were grey and black respectively in the tale, and they of course would have been much closer akin to ponies than Akhal-Tekes, but I'd like to think Breyer had those two in mind when they dreamt up these magnificent models.

Rees-Jones, Julie, and M. S. Tite. "Optical Dating of the Uffington White Horse." Archaeological Sciences: Proceedings of a Conference on the Application of Scientific Techniques to the Study of Archaeology 64 (1995), 159-162.