In the mid-1950s, hoping to capitalize on the popularity of poodle skirts, sock hops, and a booming toy market, Breyer created a Poodle model to supplement their line of horses. Sculpted by Chris Hess, the elegant dog stood square, sporting a typical Poodle cut, a fragile tufted tail, and a collar with twin bows. It never went into production however, and no documentation of the piece existed beyond a forgotten injection mold inventory list. By 1957, a different, larger Poodle, a direct copy of the Rosenthal Poodle sculpted by Professor Theodor Kärner, had joined Breyer's line up instead.

...And some things that should not have been forgotten were lost. History became legend, legend became myth, and for forty long years, the Small Poodle passed out of all knowledge. Until, when chance came, it ensnared a new bearer...

(Sorry, I couldn't help myself.)

Anyway, because of this, the Small Poodle was even more enigmatic than the In Between Mare for a time. Thanks largely to Marney Walerius, we at least had a reasonable idea of the history of the IBM even if very few examples were known. In contrast, no one in the hobby or at Breyer knew that the Small Poodle even existed until the fall of 1996. But I'm getting ahead of myself. The story began a year earlier when Nancy Young, Breyer historian extraordinaire, received a call from Stephanie Macejko of Breyer in September 1995. Stephanie had found an old inventory list of the company's injection molds, and it listed both a Large Poodle and a Small Poodle. Neither she nor Nancy knew why two Poodles were mentioned, and eventually Stephanie had an opportunity to check the warehouse, determining that the list must refer to the interlocking convex and concave pieces of the mold for the Poodle model copied from Rosenthal.1

Fast forward a year to September 1996 when respected collector Bob Peterson contacted Nancy about a collection he had recently purchased from a former Breyer sales rep. Included in this collection was a small blue-grey Poodle that the rep was certain was a Breyer. He had displayed it one year at a New York toy fair before moving on to work for other companies. As far as he knew, the Poodle had never gone into production due to lack of interest from retailers. He also owned a few other mid-1950s models---a Corky and Bimbo, a black Western Horse, and a Brahma with the original hang tag, among others.2

As you can see from these photos, the Poodle was handled quite a lot at some point, presumably during its toy fair stint. The shaved parts of the body were originally pale grey while the fuzzy coat is blue-ish grey. It has a pink collar with light blue bows. The tail tuft was broken long ago, glued sloppily, and eventually lost. 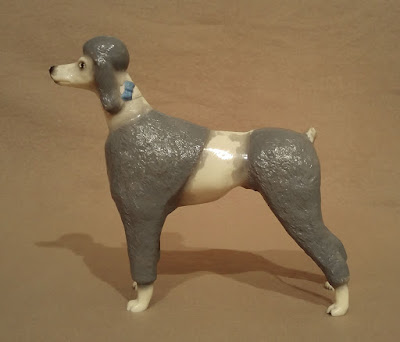 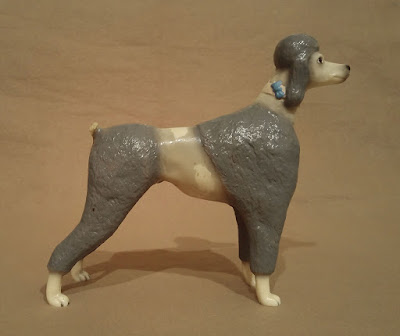 After seeing Bob's extraordinary Poodle, Nancy recalled her conversation with Stephanie the year before and encouraged her to double check the heavy molds in the warehouse. Sure enough, closer examination proved that the Large Poodle mold was for the dog copied from Rosenthal, and the Small Poodle mold was in fact a match for Bob's incredible find.

After the exciting rediscovery of the lost Small Poodle mold, Breyer featured it in their Just About Horses magazine (published bi-monthly at that time), and then surprised collectors with a special raffle at BreyerFest in July 1997. The raffle was for sixteen Small Poodles, four each in cinnamon brown, shaded alabaster, grey, and glossy black. One additional cinnamon brown Poodle was sold in the auction that year. Stephanie Macejko confirmed to Nancy Young that no more than six of each color had been made,3 and one of each are kept in the archive room at Breyer.

At BreyerFest 2000, a cream colored Small Poodle was offered in the auction. And then, later that year, lightning struck once again for Bob Peterson. He acquired the collection of the late William Ciofani, the former chief designer and painter for Breyer. Ciofani started work for the company in the 1950s and was instrumental in designing and painting models for Breyer for 40 years.4

To say that the Ciofani collection was extraordinary is an understatement. It included three woodgrain In Between Mares, a pink plastic elephant, various test runs, and most significantly, another Small Poodle. This pup is painted pink on the shaved areas and has a white fuzzy coat. The collar is gold with red bows. Like the blue-grey Small Poodle, the tail tuft is also missing on this Small Poodle. 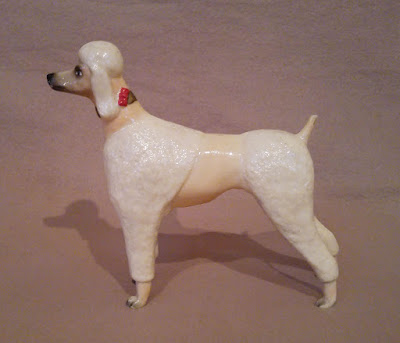 The re-released Small Poodle made one last appearance as a special run of 600 pieces in cotton candy pink at BreyerFest 2009. The mold has not been used since.

As of this writing in January 2020, no other vintage Small Poodles have turned up in the intervening  years either. I would guess a few more may exist, but whether they went home with a Breyer employee and are waiting to be discovered or instead ended up in a landfill is anyone's guess. To date, only the blue-grey and pink-and-white dogs shown here are known to collectors. My family acquired them both from Bob in 2013. 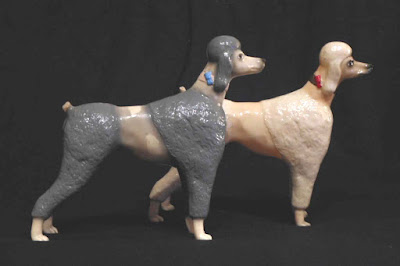 While we have been able to infer a little bit about the history of the Small Poodle, the big questions remain. When exactly were they made? And why was the mold never put into production?

Let's start with the second question as I think it has some bearing on the first one. The former Breyer sales rep who sold the blue-grey Small Poodle to Bob thought the model had never been produced due to a lack of interest in the piece.5 That absolutely may have been the case, but I think an even bigger problem was the fragility of the tail. Both known vintage Small Poodles are missing their tail tufts, and given the tiny diameter of the tail bone itself, I imagine these pups were very difficult to mold. And even if Breyer had found a way to mold them easily, that little tail would not have held up to play. For a company that marketed its plastic horses and animals as virtually indestructible, this would have been a problem. Furthermore, the Small Poodle is hollow (like most Breyers) including the tail bone. The Large Poodle in comparison is solid cast with a thicker tail bone, making it far more durable.

With all of that in mind, we can't say precisely when the vintage Small Poodles were made, but I think it can be narrowed down to a span of a few years. Without a doubt, the Small Poodle mold dates to the 1950s. It has no mold mark which would suggest a pre-1960 origin, and in fact, I think it must have been made before 1957 when we know for sure the Large Poodle was in production. I believe the Small Poodle predates the Large Poodle; as I mentioned above, the tail bone and tuft on the Large Poodle are more substantial and easier to mold, so it wouldn't make any sense to sculpt a smaller, more fragile Poodle after the sturdier one went into production. In addition, Rosenthal was likely unaware of the Breyer copy, and as a German company, it would have been difficult to pursue a copyright infringement suit against Breyer anyway. So it makes sense that the Small Poodle was a failed experiment and the Large Poodle was its replacement.

Because Breyer catalog and price list records from the 1950s are incomplete, we don't know for sure when the Large Poodle was first issued. Based on what evidence we do have---a partial catalog and price list that is likely from 1955 or 1956 that does not include the Large Poodle and both a Sears and Spiegels holiday catalog from 1957 that do include a Large Poodle---I think it's a reasonably safe bet that the dog was first issued in 1956 or 1957. (It may have gone into production as early as 1955, but I suspect the timing coincides more closely with the sewing kit/perfume special run dogs in the 1957 holiday catalogs.)

Based on a letter from June 1955 owned by Peter Stone and shared with Nancy Young,6 we know Chris Hess sculpted Lassie in late 1954 or early 1955. The sculpting style of the Small Poodle is quite similar to Lassie, so my hunch is that the two dogs were probably sculpted at around the same time.

All of this information suggests to me that the Small Poodles had to have been molded no later than 1956 to allow time for the dog to be rejected and for the Large Poodle to be approved, molded, and in production by no later than 1957. In all likelihood though, they were made earlier, probably sometime in 1954 for display at the toy fair in February 1955 (or in 1955 for display at the 1956 toy fair). I'm inclined to believe the earlier date is correct as that would make the most sense given the other models the former Breyer sales rep also owned.
We'll probably never know the whole story on the Small Poodle, but I think my hypotheses are fairly sound. Perhaps more Breyer catalogs or price lists from the 1950s will eventually come to light and reveal some of production-date mysteries of that decade.