Flockies have surged in popularity lately, driven largely by some interesting models from the liquidation of the Black Horse Ranch collection last summer, and prices for them have likewise gone astonishingly high. There has been, however, a great deal of confusion about what constitutes an original finish flocked model versus a custom or aftermarket piece. The answer, happily, is pretty straightforward.

If a flocked model appeared as a regular run in a Breyer catalog, as a special run in the Sears, J. C. Penneys, or Montgomery Wards holiday catalogs, or as a BreyerFest special run, it is considered original finish. If it did not, it's aftermarket or custom. The distinguishing factor is the intent behind the models' creation---the catalog issue models were specially ordered by Breyer and retailers in a collaboration with an Indiana company called Riegseckers. All other flockie models were produced produced independently---with no orders or input from Breyer---by a variety of family business and hobby customizers including Riegseckers, Eighmeys, the Diercks and Algyre family, and many others.

The official OF flocked models feature fuzzy coats, haired manes and tails, and sometimes glass eyes. (The Stablemates and Jack Russell from BreyerFest 2001 may have been flocked by a company other than Riegseckers. I'll update this post if I can find the answer.) The following is a list of all of the OF flocked models with links to pictures on the wonderfully handy Identify Your Breyer website.

Many collectors are not familiar with the history of flocked models in the hobby, and in my experience, that's been the source of confusion about what is or is not an OF flockie. As I mentioned above, a number of companies, families, and miscellaneous hobby customizers made flockies. Because of this, aftermarket flockies probably outnumber OF flockies by quite a bit. Riegseckers is best known because they produced the OF runs for Breyer, but they made thousands of aftermarket flockies as well. Mel Riegsecker, the company founder, grew up on a farm near Shipshewana, Indiana, but rather than continue in that business, he became an entrepreneur. His family now runs a cabinet making business, a restaurant, and more. Mel got his start though making miniature harnesses and vehicles that he hitched to Breyer models. Riegseckers often flocked models, sometimes customizing them first with lowered heads or mule ears and the like. Their models were available in the '80s and '90s, and if you could dream it, they could make it for you.

Similarly, Eighmey's Wagon Shop flocked thousands of models and produced harnesses and vehicles as well. They used to have a booth at BreyerFest in the early 1990s, and I regret not taking a picture of it when I had the chance. Suffice it to say, it was an impressive sight with stacks of flocked Adios mules, Quarter Horse Gelding mules, all of the draft horse molds in any color you could think of, and more. The Diercks and Algyre family likewise produced many similar models, but their models usually had flocked over manes and tails rather than flowing mohair like Riegseckers or Eighmeys. Various customizers dabbled in flocking as well, some even creating dappled models. Because the highest volume producers were making and selling their models in farm country (Indiana, Iowa, etc) the vast majority of flockies to be seen are draft horses or mules.

Not surprisingly, owing to confusion about what constitutes an OF flockie, I've seen more than a few collectors claiming that their aftermarket flockies are test runs, OOAKs, or rare runs of only a few models. Hopefully, most are not doing so with the intent to deceive, but a few are. Without irrefutable documented provenance---at this point, I wouldn't accept anything less than a letter from Mel Riegsecker or Peter Stone certifying that a particular model was a test submitted to Breyer for approval---all of these so-called tests or rare flockies are just aftermarket customs. So do your homework and don't be fooled!

Now, that said, an aftermarket flocked model is not a bad thing by any means. As we've seen, prices for them are sky high, and with vintage custom collectibility becoming a thing (more on that in a future post), there will absolutely be a place for them at live shows and in collectors' herds. I show my own aftermarket flocked mule (below) in vintage custom classes, and she gets lots of admiration even if she doesn't win. (She is adorable after all.) 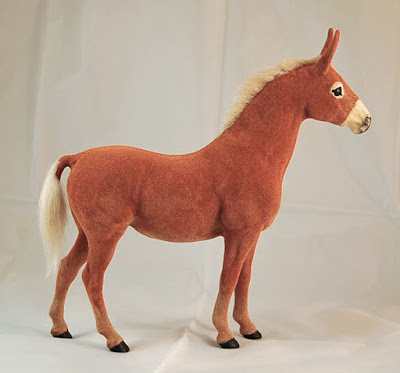 Many hobbyists tried their hand at flocking as well, and they didn't just stick to horses!

Some aftermarket models are more popular than others. Drafters, Adios models, and Stablemates seem to be of particular interest to collectors.

Stay tuned for a blog about rare Breyer packaging next time around. Thanks for reading!
Posted by Kirsten Wellman at 9:57 AM 9 comments: