I conga a handful of Breyer molds because it's reasonably affordable to do so, and acquiring interesting variations to fill out a particular collection can be lots of fun. (For example, I posted about my herd of dapple grey Proud Arabian Mares a while ago.) But conga collecting clinkies has never really been something I've pursued. Chinas tend to be quite a bit more expensive than your average plastic model, they're often much harder to find, and most were never released in a wide variety of colors and patterns like you see with plastic models.

Nevertheless, I seem to have sort of accidentally-on-purpose acquired a scurry of Hagen-Renaker Designers Workshop Jane (B-720) squirrels. Jane was masterfully sculpted by Maureen Love, and at a little over 5 inches tall, she's almost life size. 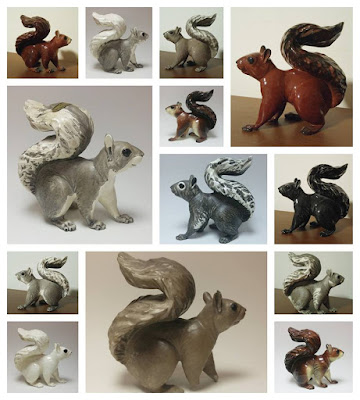 This inquisitive critter was first produced at Monrovia from spring of 1960 to fall of 1961 and again from fall 1965 through spring 1966. In spite of this fairly short production timeline, variations abound. The Monrovia production colors were glossy solid red with a bit of white on the muzzle and chest and matte grey with white highlights. Jane doesn't seem to crop up for sale very often, so the only Monrovia red I have seen is my own. 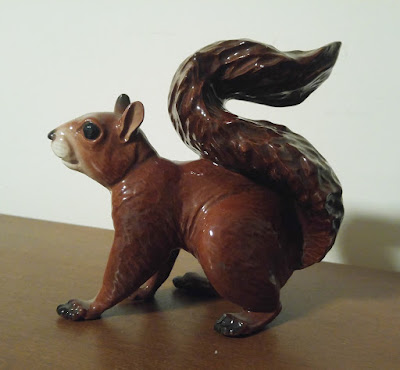 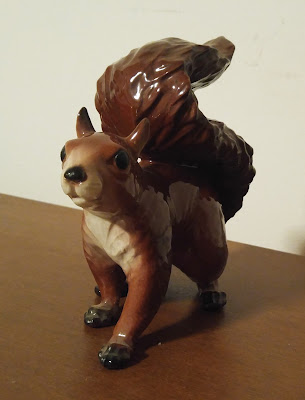 Two distinct versions of the Monrovia grey Jane exist. The first is a soft matte grey with glossy white highlights on the chin, chest, front legs, and tail. The amount of white varies from piece to piece.

My first grey Monrovia grey Jane came from the Hagen-Renaker archive sale. She has a Monrovia oval name sticker. 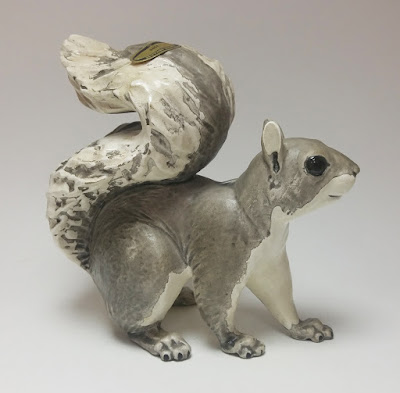 My next Jane was purchased from a fellow collector. She looks quite similar, but has slightly less extensive white on her underside and tail. 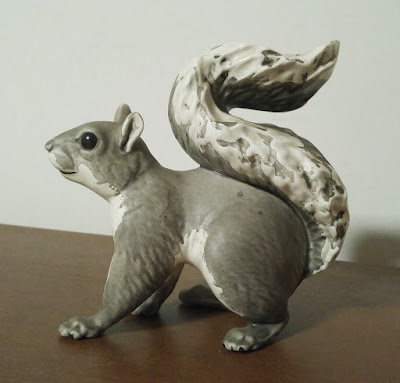 My third grey Jane came from the same collector, and she has much more extensive white on her legs and the side of her face, but she has almost no white at all on her underside. I believe that her decoration style may represent a transitional period between the earlier Janes above and the later ring-eyed Jane pictured below. 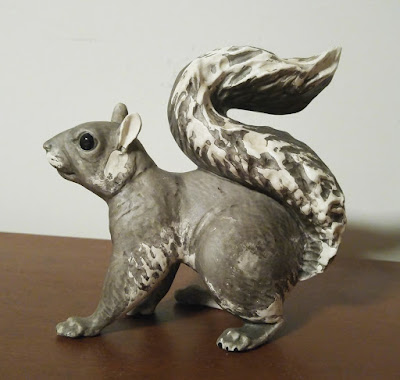 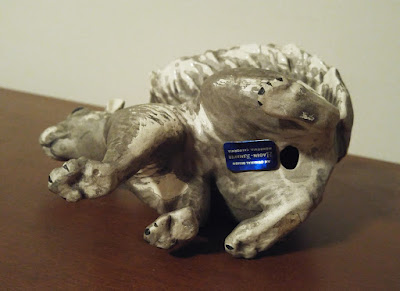 I don't know this for certain, but I am guessing this darker grey ring-eyed Jane dates to the second Monrovia production period from Fall 1965-Spring 1966. She lacks any white on her underside, and her heavy, dark grey glaze combined with the oddly ringed eyes look rather crude compared to the softer grey Janes above. If my dating of these color variations is correct, this later, somewhat cruder work coincides with a time when the HR factory was in the process of moving from Monrovia to San Dimas. Because she came from the collection of Karen Grimm, it was suggested to me that she might be a test, but I know of at least one other ring-eyed Jane pictured in the Charlton guide. (Does anyone reading this blog have a Jane like this?) 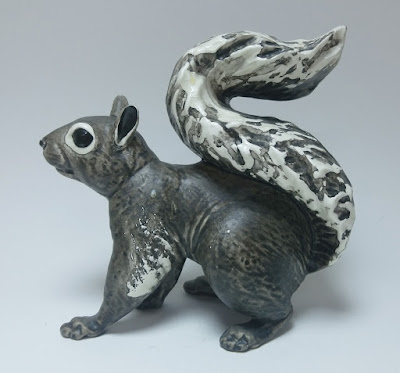 Jane was also produced at San Dimas from Fall 1969 to Fall 1972. She was again offered in glossy red but this time with white on the belly, legs, and face. She was also produced in a solid glossy grey color with lighter grey highlighting on the tail. The red squirrels varied a bit in the intensity of their red-brown color and in terms of how much white they have on the faces and legs.


Despite being offered for a little over 6 years altogether, Jane is not a very easy piece to find. I imagine she might have been a challenge to mold, so it seems possible that production numbers were limited during the years she was available. Or, despite her charm, perhaps Jane simply didn't sell well. (I can't imagine why---she's adorable---but some people do view squirrels as pests.)

Mostly through luck, I have added a surprising assortment of test run Janes to my collection. The first two are from the Hagen-Renaker archives which were sold on eBay throughout 2015 after John Renaker passed away in November 2014.

This grey test Jane looks very much like the Monrovia release, but she has a completely white tail. She also has a great deal of white over-spray on her body under her tail that was not cleaned up before firing. 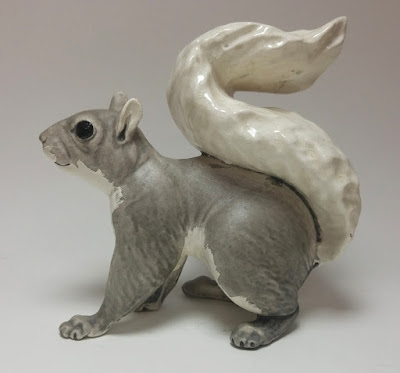 Jane was never officially produced at the San Marcos factory, but nonetheless, several tests from those short years in the 1980s do exist. This glossy solid white Jane also came from the Renaker estate archive sale. 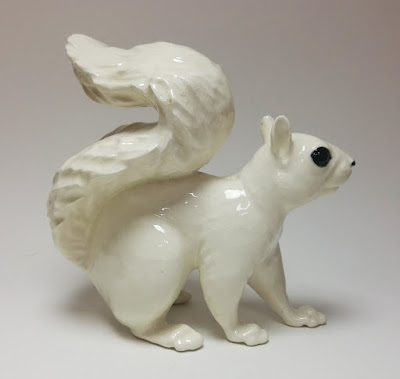 A second glossy white Jane came out of the collection of a former employee and now belongs to my sister. 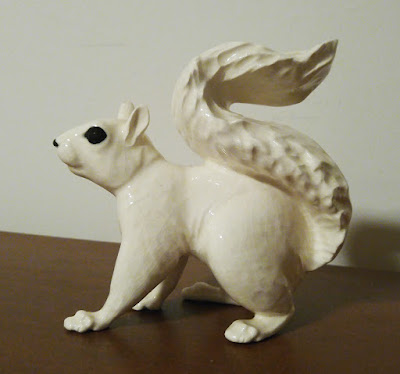 This glossy solid red Jane came from the same collection, and interestingly, it was cast in white slip rather than brown. 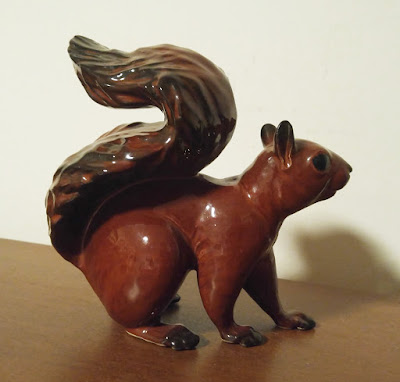 Likewise, this glossy solid black Jane from the same collection was also cast in white slip. 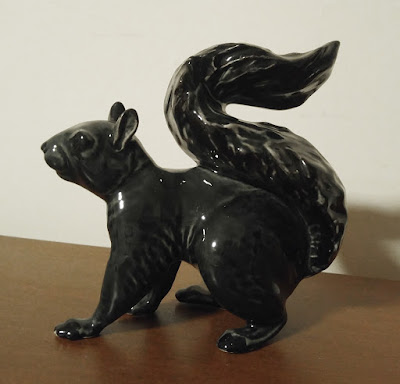 Probably the oddest Jane in my collection is this matte grey-ish brown critter. I found her on eBay from an Arizona seller for the bargain price of $6, and as you can see from the pictures, she has had a hard life. Based on the dirt caked into her crazing, I believe she must have spent some time outdoors, possibly as a garden or yard decoration as Maureen Love was wont to do with her creations.

She was poured in greyish-brown slip and has a bit of subtle shading to bring out the mold detail. But what is she? My first thought was that maybe she was a matte version of the San Dimas grey that escaped the factory without being glossed. But she is definitely not the same base/slip color as my glossy San Dimas grey Jane. And she doesn't match the slip color of my Monrovia matte grey Janes either. Maybe she was poured, either deliberately or accidentally, in the wrong slip color and then finished and sold or was taken home by an employee. Similar instances with other models are definitely known. Could she be a test? Maybe. I'll probably never know, but I think she's a pretty neat find even in her damaged state. 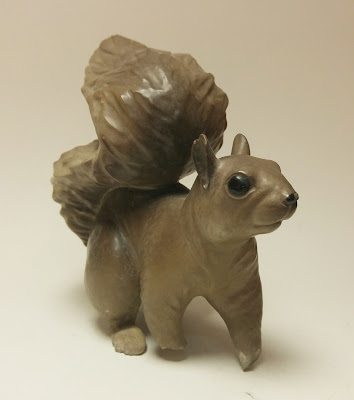 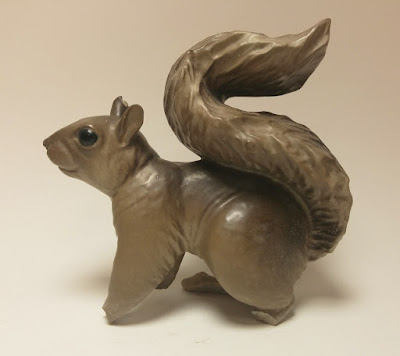 After Maureen Love passed away in 2004, many of the sculptures and sketches she kept for herself were dispersed by her family the following year on eBay. I was a poor grad student at the time, and I deeply regretted not having the means to purchase any of the art from her estate. Last fall, however, Maureen's granddaughter offered up several hundred more sketches on eBay. Given my Jane addiction, it should come as no surprise that this particular sketch came to live with me. 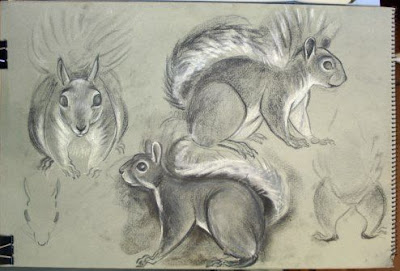 I have yet to get it framed (it's double-sided), but one of these days, it will hang next to a display of my Janes. And probably some other squirrels. I may have inadvertently started collecting more...


* (with apologies to Perry Farrell, Dave Navarro, et al. Oh, who am I kidding. That was an amazing pun.)