When Nancy Young's Breyer history books were published in the mid-1990s, I poured over them for hours and days and weeks. I pretty much read the first book (and the later updated book for that matter) cover to cover including all of the weird minutiae about variations, stamps, mold flaws, and other oddities in the footnotes about each mold. I found answers to all sorts of questions I'd had over the years and learned many new tidbits as well.

One particular oddity that stuck with me was an anecdote about an experiment with bronze paint that Peter Stone and Chris Hess conducted.1 According to Nancy, sometime in the 1970s or early 1980s, Peter and Chris experimented with a bronze-colored rub-on finish called Bronze Glo (or something similar---Peter couldn't recall the name for sure). They tried it on a variety of molds---Peter mentioned the buffalo, some bulls, and possibly the Quarter Horse Yearling.2 Because the finish was applied by hand, it seems likely that it was deemed too time consuming for regular production and nothing ever came of the experiments. Peter could not remember what became of the test models, but presumably, they were taken home by Breyer employees or reground.

Over the intervening years, a few models that seem to be the results of Peter and Chris' experimentation have found their way into collectors' hands. The first one I became aware of was a bronze Jasper the pig that a friend of mine turned up at a flea market in the mid-1990s.


A few years later, my family acquired a bronze donkey and elephant. Two or three other bronze elephants have surfaced since then as well. Interestingly, at least two of the elephants have black painted eyes while some of the other Bronze Glo pieces do not. My elephant, another I have seen, and the one Nancy describes in her book also have a bit of dark shading that gives them an antiqued finish.

A few years ago while surfing eBay, I spotted a bronze-colored Breyer bighorn ram in a lot of miscellaneous models. I was pretty sure it was one of Peter and Chris' experimental models, so I took a chance on it. Sure enough, it was!

Until this past year, however, no bronze-colored equines from these experiments had come to light. Once again, while idly eBay surfing, I unexpectedly turned up a model that had the right look, so I took a chance. This Family Arabian Mare appears to be part of the same experiments, but she is a little different from the other examples I've seen. 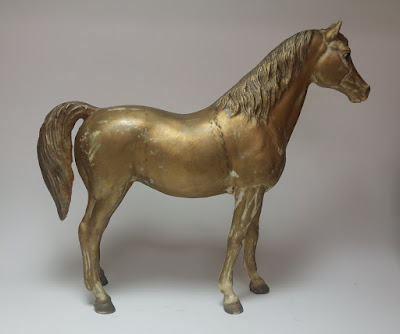 As you can see from the photos, she's had a rough life, and while she does have some rubs, the vast majority of the areas missing paint are recessed areas---muscle and tendon grooves, that hard to reach spot behind the elbow, etc. This is consistent with the paint having been rubbed on rather than sprayed on. (I assume her feet lack bronze paint because she was being held by her hooves while being painted?) The same incomplete finish is visible on the head and in the deeper grooves of our bronze Elephant. The peculiar thing about this FAM though is that she is the only bronze model I've seen that was painted over an already finished model, an alabaster FAM. More on that in a minute.

According to Nancy, Peter couldn't remember exactly when he and Chris had experimented with the bronze paint, but based on the extant models themselves, I would guess it was sometime around 1974. The Donkey mold never received a Breyer mold mark or the USA stamp, so that model can't really tell us anything. The Elephant mold did not receive the round Breyer mark until 2000 (or possibly later), but sometime between 1970 and 1974, the USA stamp was added. (The USA mark was added to most Breyer molds around 1970.) Our bronze Elephant has no mold markings, so it probably falls somewhere in that 1970-1974 window. The Elephant mold was discontinued at the end of 1974, resurfaced briefly in 1976 with a USA stamp for the election year, and then was not produced again until the 1990s, so the bronze model probably wouldn't be later than 1974 (unless an old stock model was used which is certainly possible).

The Bighorn Ram mold was introduced in 1969, and while it has a round Breyer stamp, it never was updated with the USA mark. We can narrow the timeline even more with the bronze Jasper pig model---Jasper was not released until 1974.

The monkey wrench in this bit of logic is the bronze FAM. We know the underlying alabaster FAM was made until 1973, but this mare has only the round Breyer stamp, no USA stamp, which would suggest she was made before 1970. My best guess is that she was perhaps still sitting around the factory as a sample or display model or even as unsold stock when she was grabbed for the bronze paint experiment.

The terminus post quem date is a little fuzzier in that it's possible Peter and Chris used an Elephant that had been sitting around for a while as they seem to have done with the FAM. So we can't say for sure they were made no later than 1974, but at the moment, circa 1974 (or even circa mid-1970s) seems like a reasonable guess given the evidence we have from the models that have been found.

This post is of course predicated on the notion that the bronze/antiqued gold models pictured above are all the result of the same experiment. They do all look similar enough that it seems probable that they are part of the painting experiment that Peter Stone related to Nancy Young. If anyone reading this has a potential bronze glo Breyer, especially on a mold other than the pig, donkey, elephant, ram, or FAM, I'd love to know about it! Please feel free to comment with photos or email me at mumtazmahal (at) gmail (dot) com Thanks!