When I first saw the announcement for Trailblazer, Breyer's 2020 Vintage Club retro grooming kit Western Horse, I may have squealed out loud. (Who am I kidding, of course I did!) Not only is he a fun homage to the (hilariously named) Giant Palomino Groomer of the 1950s, but he also comes with a very cool vintage-style box based on the old Breyer horse and rider set boxes. It's an absolute smorgasbord of Breyer vintage nerdiness, and I must have one (or even two as there appears to be a version with a plastic slip-on saddle as well). I've been meaning to blog about Breyer grooming kits for quite a while, and now that Trailblazer has been announced, this seems like the perfect opportunity. 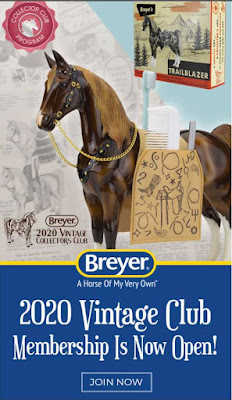 In the early 1950s, Westerns were at the height of their popularity. The genre had been lucrative for decades for writers from Zane Grey to Louis L'Amour, and for movie producers from the days of silent films, but as televisions became more common in American homes in the boom years after World War II, Westerns became a true pop-culture phenomenon. Many companies cashed in on this trend with all manner of "Cowboy and Indian" themed toys, child-sized cowboy boots and hats, toy six-shooters, and much, much more. Holiday catalogs were full of all sorts of these items catering to both boys and girls, and Breyer of course was right in the thick of it with horse and rider set offerings like Kit Carson, an Indian brave and chief, several cowboys, and Western Horses and Ponies in a variety of colors.

Breyer offered their horse and rider sets for play, but they also offered some spin off items like the Fury Prancer music boxes (more on those in a future blog) and various grooming kits, most with a Western theme. I don't have a full library of old catalogs at my disposal, so this post may not contain an exhaustive list of Breyer grooming kits, but as far as we know, the first grooming kits debuted in the 1954 Sears holiday catalog. They consisted of a regular run palomino Western Pony, but in place of the usual plastic snap saddle, the pony sported a vinyl "pack saddle" instead. Each pack saddle had a snap girth and several pockets on either side to hold a toothbrush, plastic comb, nail file, and nail clipper. My family acquired several different old grooming kits still sealed in the box in the 1990s at our favorite flea market, so we know that while Sears very likely supplied the vinyl grooming kit saddles and the little accessories for the grooming kits, they were packaged and sealed at the Breyer factory. (Sears of course is also a Chicago business, and at that time, its main ordering and distribution hub was less than 2 miles from Breyer, making collaboration between the companies an easy venture.) These Western Pony grooming kits constitute some of the earliest special runs that Breyer offered. (The Mastercrafters clocks technically have the distinction of being the very first.)

Interestingly, Breyer used regular Western Pony cardboard mailer boxes for their grooming kits. The only thing to indicate there was something other than a normal pony with the standard plastic saddle inside was the item number stamped on the box. By the early 1960s, grooming kits were also available on alabaster and black and white pinto Western Ponies. Some came with different accessories, such as the rifle-shaped pen, ruler, and eraser with the alabaster pony below. The Western Pony grooming kits were available off and on in the 1950s and 1960s and were last seen in the 1973 Sears catalog.

As you can see from the photo below, the vinyl pack saddles came in varying shades of tan and brown, and some were smooth while others had an embossed surface meant to mimic leather tooling. The designs include steers, lariats, spurs, bucking broncos, cowboy boots, etc. Several tooling patterns have been observed, and some of these pack saddles have dark "tooling" on the designs while others have shading all over.

In 1956 and 1957, the Sears catalog offered the palomino Western Horse with a grooming kit saddle and accessories as the Giant Palomino Groomer. Like his smaller compatriot, the Giant Groomer has been found with a smooth or tooled pack saddle, and they contain a toothbrush, plastic comb, nail file, and nail clipper. The Western Pony grooming kits are fairly common which is not surprising given how long they were offered. The Giant Groomer sets are much harder to find.


The 1958 Sears holiday catalog featured some of the most rare and desirable of the grooming kits, the alabaster Proud Arabian Mare and Foal sets and the Western Pony with the houndstooth blanket. The PAM and PAF set were offered in 1958 only because, by mid-1959, Breyer had been sued by Hagen-Renaker for copyright infringement. Hagen-Renaker won, and the PAM and PAF were discontinued before the next holiday season. The Western Pony with the unique blanket grooming kit was offered in 1958 and 1959, but he, too remains exceedingly scarce. I know of only two mares, both found new in the box in the Atlanta area (now owned by my sister and me), around ten foals in boxes, and about six of the Western Ponies with houndstooth blankets (two of which were found with boxes and are in our collection). I'd to love to hear from anyone who might have a PAM or Western Pony grooming kit like these! 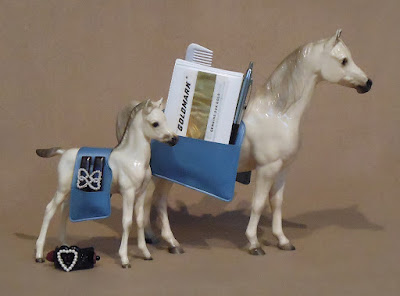 The PAM grooming kit features a uniquely shaped powder blue vinyl saddle with pockets for a plastic comb, nail file, nail clipper, pen, and notebook. The set also includes a strip of gold leaf so kids could emboss their name on the notebook (or saddle or horse or sibling). 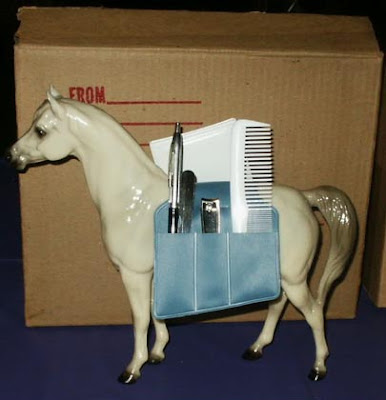 The PAF grooming kit has a matching blue saddle on a smaller scale with pockets for the cute tortoiseshell barrettes included in the set. 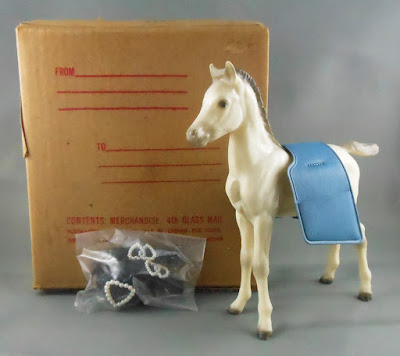 The Western Pony has a most unusual grooming kit saddle, a checked vinyl blanket with a smooth saddle-like section complete with stirrups. It snaps under the belly like all of the other grooming kit saddles. The stirrup leathers are attached to the blanket portion and have loops to hold a plastic comb, toothbrush, nail file, and a ballpoint pen. Like the more common Western Pony grooming kits, it came in a box with a line drawing of a regular pony, and only the item number stamped on the box indicates it's not a normal Western Pony. 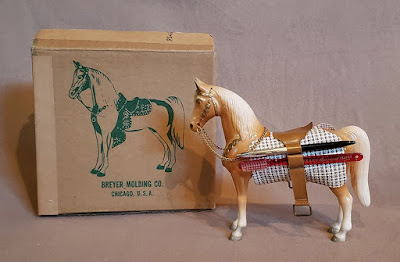 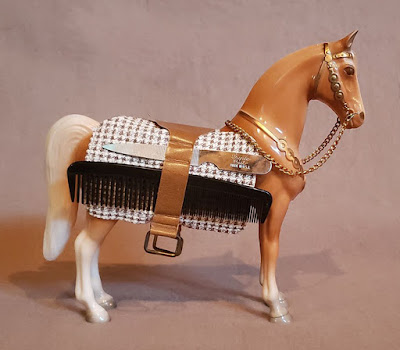 Another very rare grooming kit is the bay Rearing Stallion set pictured below. I have only seen one example which is in our collection. The saddle is about the same size as the Western Pony saddles, but the pockets are cut at an angle (rather than being rectangular), and this set came with the less common accessories, a ruler, rifle pen, and eraser. As I mentioned above, we don't have a complete record of holiday catalogs, so as of this writing, the Rearing Stallion set has only been spotted in the 1966 Sears holiday catalog. (I don't have a photo of my Rearing Stallion set yet, but I'll add one after the holidays.) Do any of my readers have this unusual groomer, too?

The 1969 Gamble Aldens catalog also advertised a rare grooming kit, an appaloosa Running Stallion set that held a comb, toothbrush, nail clipper, and file. I have not seen a set in person yet, but from the picture, the saddle appears to be identical to the ones sold with the Giant Palomino Groomers. 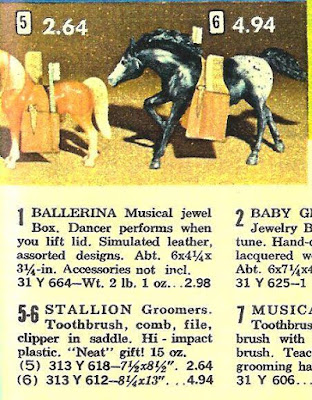 Interestingly, at least one knock-off of the Breyer grooming kits was made. I have seen several examples of a pseudo-bay Hong Kong horse, a crude copy of the Breyer Western Prancer, all wearing brown vinyl grooming kit saddles with a name printed on them---Tammy, Rusty, Mike, etc. My sister and I actually own two of them. We bought the first one thinking that perhaps the saddle might have been meant for a Breyer and had just ended up on the wrong horse at some point over the years. But having seen multiple identical sets now, I'm certain these are not Breyer saddles. The construction of the saddles is very similar to the Breyer saddles however, so whichever company made them may have been the source for both the Breyer sets and the knock-off sets. I would guess these Hong Kong copies were also offered through a mail order catalog, and while the horses were manufactured overseas, the saddles and accessories were probably sourced here in the US. The saddles all bear different names, either in print or in cursive, which suggests to me that the sets could be ordered with personalization for the recipient.

Breyer's Western Prancers were first issued in 1963, so these copies must of course be later. I would guess they date from the late 1960s or early 1970s.

The Western genre was on the decline by the 1970s, so I would guess these sets, along with the ones Breyer made, were discontinued by the mid-1970s at the latest. As I mentioned above, the last appearance of the Breyer grooming kits came in 1973. The world by that point had moved on technologically and culturally by leaps and bounds since the 1950s, and the toy market was geared more towards the space race than a nostalgic look back at the Old West.

My parents grew up in the 1950s, and so as a kid growing up in the early 1980s, they happily encouraged my cowgirl phase with a Clip-Clop horse, a hat, boots, and little cap guns. I have never really outgrown my fondness of Westerns---everything from classics like the Lone Ranger and The Good, The Bad, and The Ugly to Longmire and Firefly---and I am delighted that after almost 50 years, Breyer will be offering a new grooming kit for us. I can't wait!


(ETA: Many thanks to my friend Lisa R. who sent me a copy of the Running Stallion ad!)
Posted by Kirsten Wellman at 2:19 PM 2 comments: