Thelwell's Kipper: A Leg at Each Corner

One of my favorite memories of visits to my grandparents' farm was going into the study to look through Grandma's horse books. I inevitably selected her boxed set of Thelwell books as my reading material for an afternoon and curled up on the couch to giggle at the cartoons. Norman Thelwell, a British writer and cartoonist, had a unique and hilarious perspective on country life and a particular insight into the minds of small, clever ponies and their often unwitting victims riders. Thelwell's ponies were delightfully fat, hairy, and naughty. 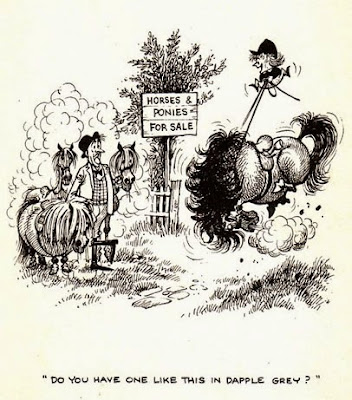 Thelwell's first pony cartoon was published in 1953, and his first book of humorous pony illustrations, Angels on Horseback, followed soon after in 1957. The demand for his work, especially the ponies, was tremendous, and not long afterward, licensed Thelwell pony models were introduced to the market.

The earliest I know of were made by a company called Plastech and were probably made in the 1960s and/or 1970s. I've seen examples in grey, brown, and palomino. They all have rooted hair, tack, and a cute little rider (Penelope, perhaps?). 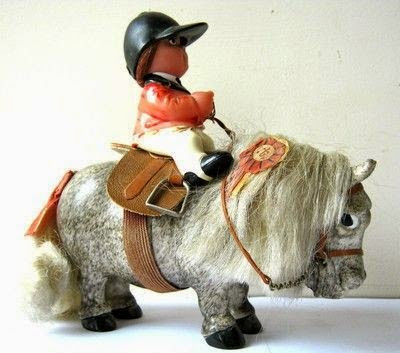 In the 1980s, Beswick and several other ceramics companies made a variety of Thelwell ponies in porcelain and sometimes resin.

But for the purposes of this post, I am primarily interested in the "Kipper" Thelwell model made by Breyer as there has been some misinformation about the piece floating around lately. Kipper debuted in 1986 and was of great interest to my young self, but apparently was less so to adult collectors at the time (the models did not sell well). The 1986 dealer catalog featured only Kipper but alluded to the production of two other ponies, Midget (pinto) and Pumpkin (palomino).

The smaller 1986 "box catalog" featured a picture of all three ponies.

All four ponies pictured in the catalogs appear to have the same bodies, but the heads and ear positions vary a bit. According to Breyer historian Nancy Young, as per a conversation with Peter Stone, these ponies were resin-cast prototypes, not plastic models. The dappled brown Kipper in the dealer catalog was auctioned off at the first BreyerFest, and Peter noted at the time that it was one of two, the other of which was in his personal collection. Presumably, the pony Peter kept is the true bay shown in the box catalog photo. The Midget and Pumpkin prototypes probably also still belong to Peter.

UPDATE: Interestingly, during the BreyerFest 2021 live stream of the factory archive room, Kelly Weimer and Kelly Keracher, the hosts, showed off this set of Thelwells to collectors. They are made of vinyl, not resin, so it would seem the other Thelwell models made it past prototyping after all. What a shame they weren't all produced!

The Kipper model that Breyer ultimately produced had a very similar head to the prototypes but a different body. 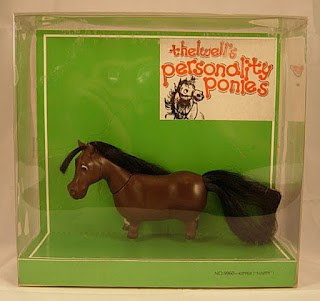 The production Kipper is standing square and has much shorter legs, and the model is made of a vinyl-like hollow plastic with a rooted nylon mane and tail. They sold in clear plastic boxes with a green backing card as seen above. The models are marked "© 1986 thelwell." Approximately 5,000 were made, but the line was discontinued due to poor sales, and neither Pumpkin nor Midget ever went into production. Leftover Kippers were sold by several Breyer dealers. My own Kipper came from Mission Supply House in Florida.
In the last few years, I've seen a few Thelwell-like toy ponies being advertised at shows or for sale as purported test runs for Breyer's partially unreleased Thelwell line. These ponies certainly do look similar stylistically, but they are clearly not the same quality as Breyer's Kipper. They are less well sculpted (especially the legs and hooves), they are made from cheaper materials, and the real kicker is the way they are marked. The wannabe ponies are stamped "© BBC WW 1999, Licensed by S4C Intl, Made in China" which should make it clear they not Breyer Thelwell test runs (nor Breyer pieces of any sort) for a number of reasons, the date being the most glaringly obvious.

A bit of quick research and some help from the British Model Horse Collectors group on Facebook revealed that these little Thelwell wannabes are actually toys based on a BBC children's program called "Star Hill Ponies" which ran for several seasons beginning in 1998. It was also broadcast in Welsh in Wales, hence the "Licensed by S4C" bit of copyright on the pony's belly. Episodes can be found on Youtube.
The Star Hill Ponies are undeniably cute, but they are definitely not Breyers nor are they related to Thelwells in any way. They can often be obtained on eBay for less than $10 each.

I hope this post clears up some of the confusion about what is and is not a Breyer Thelwell. All of the ponies shown here, regardless of maker, are collectible in their own fashion, but hopefully my little bit of sleuthing will save collectors from paying far too much for a models that are not Breyers.