My annual pilgrimage to Lexington for BreyerFest kicked off a bit early this year. My sister, Sarah, and I decided we both wanted to attend the Hagen-Renaker Collectors Club Fellowship event in Dandridge, TN, so I flew down to Atlanta to meet up with her the weekend before. On Monday of BreyerFest week, we hit the road, stopping to look through some antique stores along the way. We found a few fun things, including a rare sighting of this fellow. Who knew there were Sasquatch in Georgia? And damn fine stuff for that matter. 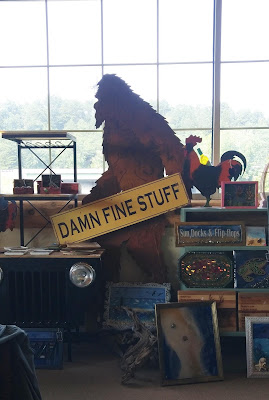 Speaking of good stuff, Sarah and I were idly talking about this blog as we wandered through a large antique mall, and I mentioned a plan for a future post about Hartland Champs, Breyer Western Horses, and the various knock-offs of both that you see regularly. She gets out and about more often to hunt for horses than I do, so I asked her to keep her eyes peeled for reasonably priced copies. The words had barely left my mouth when we turned a corner and were confronted by this handsome fellow. He's a nice copy of the Hartland Champ (note the pointy Hartland-style conchos on the bridle) made of some sort of heavy tenite-like plastic. He's cast in brown plastic with painted gold highlights. (I've seen these identified as having been made by Ohio Plastic, but based on an actual OP horse I own, I doubt very much they were made by the same company. There are radical difference in quality, but that's a matter for a future post.) 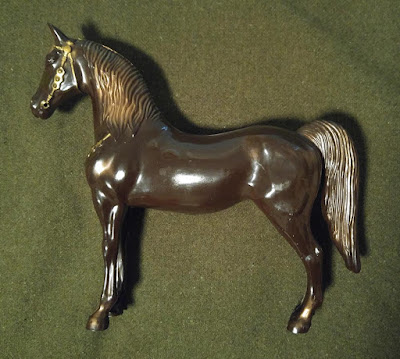 We checked into the host hotel right around dinner time and then headed over to HR TN for the festivities. All attendees received adorable HR mini milk pails that Kristina Lucas-Francis had custom glazed as spilled slip buckets. And everyone was given a ticket to enter one of several raffles. Prizes included a Cabellas gift certificate, HR Little Horribles "Moose" figurines, and other fun stuff. 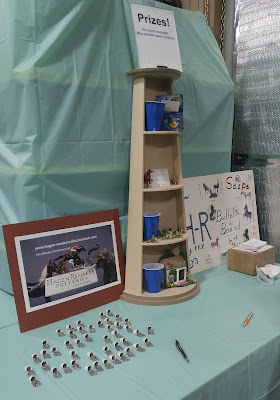 HRCC members who had ordered Frosty, the beautiful new bay roan Crusader, were able to pick up their models that evening, and Debut, a new release on the old Mini Head Up Horse mold was available for sale as well. Needless to say, one came home with me. His shaded grey color is a wonderful homage to the early days of Hagen-Renaker, and the mold detail on these guys is just incredible. 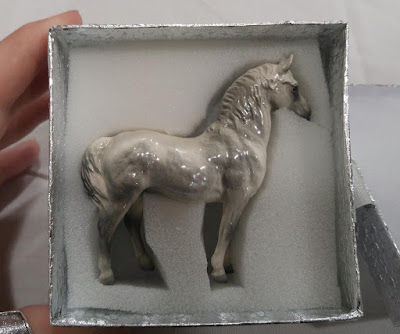 Besides shopping, touring the HR museum, and socializing, one of the evening's activities was glazing soothing stones. Kristina made these from an impression of the DW Love's head.

Later that evening, some of the raffles were drawn, and I had the good fortune to win this ridiculous Little Horribles piece, my very first from that line. The Little Horribles were made in 1958 and 1959 only, and all were issued with a little illustrated card with a saying or pun about each piece. Moose's saying was "I think I'm over the hump." Most of the jokes fall a bit flat these days, but humor does evolve like everything else. Moose is weirdly cute all the same. 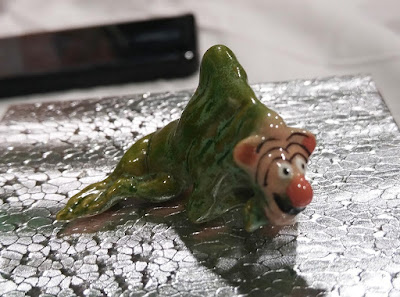 The following morning, we rolled out of bed early to grab some breakfast before the sales room opened at the host hotel. We had a lovely time chatting with old and new friends while we sipped lots of coffee. (Because who doesn't want to load up on caffeine before handling fragile clinkies, right?) The room was small, but there were so many lovely things for sale. Sarah and I each found a few pieces to add to our collections.

Heather Wells brought along 21 of the Cartoon Horse (the ultra rare Sleeping Beauty Sampson mold) re-releases glazed in the wrong shade of brown to raffle off. Sarah and I were thrilled to both be drawn to buy one.

When lunch time rolled around, we decided to head into Dandridge to see the sights and get some food. The reservoir next to downtown is lovely and peaceful. 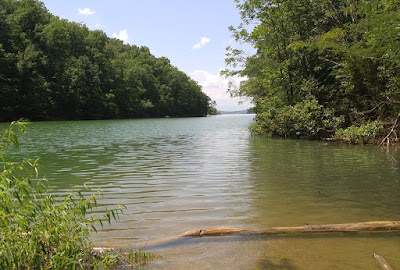 We ended up driving along the reservoir for about 10 miles until we reached the lock and dam. The views with the Smoky Mountains across the lake were spectacular! 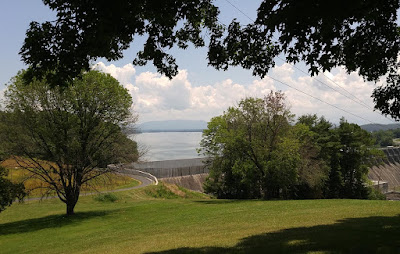 Because we had to head back to Georgia to pick up our parents and our BreyerFest showstring, we couldn't stay late at HR TN that evening. We said our good-byes, grabbed a sandwich for the road, and headed back south.

BreyerFest passed in a sleep deprived blur, but I do at least have some pictures to share on my next post. I will try not to take a month to post it!

Posted by Kirsten Wellman at 2:00 PM No comments: