At the end of this year, Hagen-Renaker will be closing its California factory for good after 76 years in business. It's the end of an era. While I am terribly sad about this news, it's not entirely unexpected. I've known for some time that there was no one else in the younger generations of the Renaker family interested in continuing the business when the present owners retire, and material and labor shortages during the pandemic have only hastened an inevitable end. (Before anyone panics too much, Hagen-Renaker Tennessee will continue to produce Hagen-Renakers under an official license from the family, a pretty amazing silver lining! More on that later in the post though.)

Hagen-Renaker has offered an amazing array of products over the course of their remarkably long history. In the model horse community, they are of course best known for the incredibly beautiful and lifelike horses sculpted by Maureen Love. Hagen-Renaker produced many other animals, both large and small, like the handsome Pedigree Dog line sculpted largely by Tom Masterson, as well as a variety of domestic and wild animals and even fantasy creatures. The comedic arts of Don Winton, Nell Bortells, Martha Armstrong Hand, and Helen Perrin Farnlund were put to excellent use with the Disney and Little Horribles figurines, and even Moss Renaker, mother of company founder John, designed pieces as well. 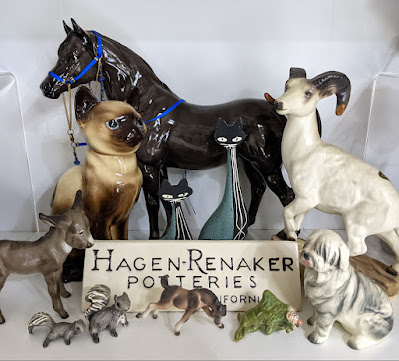 Hagen-Renaker began in 1945 in the garage of John and Maxine (née Hagen) Renaker in Culver City, CA. The company started by making simple dishware and shadow boxes, but they quickly found that the real bread and butter of the pottery business was small ceramic animals, both realistic and whimsical.

In the boom years of the early 1950s, Hagen-Renaker moved their production to several buildings in Monrovia, CA. This added space allowed them to branch out and add the larger scale Designer's Workshop line to their production. It featured exquisite horses... 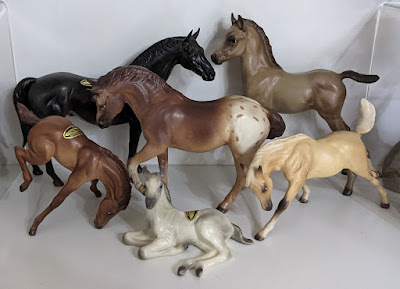 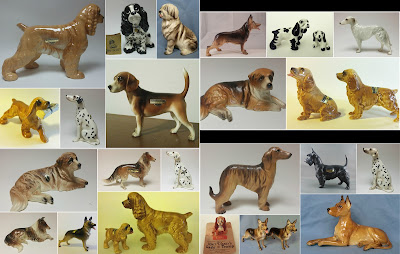 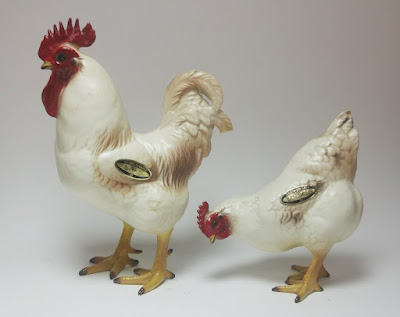 and much, much more. 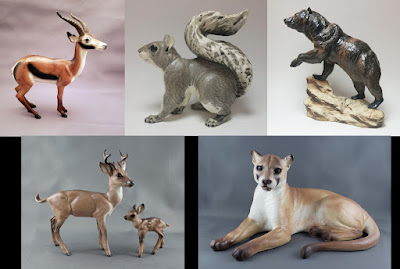 The 1950s also saw the introduction of the Disney line, considered the finest 3D renderings of Disney characters by Walt Disney himself, as well as other imaginative designs like Black Bisque, faux-stone plaques, the Zany Zoo, and the Little Horribles.

By 1960, however, competition in the form of cheap unauthorized copies from Japan nearly put Hagen-Renaker out of business. They were forced to lay off the majority of their artists, and the company limped along with a skeleton crew. In about 1966, sales and consequently production began to pick up again, and the company moved 15 miles east to San Dimas, CA, where they had more room to expand. Though both the Miniature and Designer's Workshop lines continued at San Dimas, the decoration style was simplified to be more cost efficient. Pieces in the DW line at this time tended to have short production runs, so San Dimas pieces are often more rare than their Monrovia counterparts.

In 1980, Hagen-Renaker purchased the Freeman-McFarlin factory almost 100 miles south of their San Dimas location. This new factory had the space and facilities to devote to the production of larger scale ware, and some of the biggest and most spectacular DW pieces were made at San Marcos.

Sadly, the Designer's Workshop line was never as profitable as the Miniatures line which had remained in production at San Dimas. In 1986, the San Marcos factory was closed up and sold, and all production returned to San Dimas where it remained for more than 30 years.

In the late 1980s and early 1990s, Hagen-Renaker added the Specialties line, featuring slightly larger and more detailed sculptures than the usual Miniature pieces. They even experimented with stoneware finishes for a short time.

In 1993, Hagen-Renaker began to make a new line of small DW scale horses, beginning with Jamboree based on a sculpture Maureen had issued independently under the name Maureen Love Originals. A new sculpture for the line followed almost every year, and in 2000, Hagen-Renaker announced the return of the old DW horse molds in a fun variety of colors.

In Fall 2018, Kristina Lucas Francis opened Hagen-Renaker Tennessee, an officially licensed offshoot of the main company. Kristina learned the ceramics trade from HR-trained artists and their pupils, so I can't imagine a more perfect steward of the company's body of work. She has been producing small editions of DW and Mini pieces in exquisitely detailed colors for the last few years. As expected, the Hagen-Renaker Tennessee line has mostly consisted of horses so far, but Kristina has offered tantalizing sneak peeks of animal figurines coming in the future (and of course, the resurrection of the delightful Dead Bird as seen below).

Though Hagen-Renaker California will officially shut down in the next few weeks, Hagen-Renaker Tennessee will carry on. Kristina has already begun the process of moving a number of the molds to Tennessee, and she is offering exciting hints to members of the Hagen-Renaker Collectors Club, the best source for information on upcoming pieces.

Some Hagen-Renaker Tennessee pieces are only available to HRCC members, and membership is only $29 a year. Not only does it allow purchase opportunities for exciting new runs, but members also get access to the Hagen-Renaker Field Guide, bi-monthly online newsletters, a printed annual at the end of the year, and fun Hagen-Renaker swag (mugs, T-shirts, etc). The HRCC is doing a membership drive right now through December 15th, so if you have not already joined, I highly encourage you to do so. (And if you mention my name as the person who convinced you to sign up, I'd very much appreciate it!)
Posted by Kirsten Wellman at 7:45 AM