Turning back the clock on the Breyer Western Pony

One of the perks of working for my alma mater, the University of Chicago, is access to its extensive library collection of more than 12 million volumes. Through it, I also have access to a variety of affiliate libraries in the area with interesting holdings of their own. Last May, I was finally able to visit one of these libraries to look through their issues of Toys and Novelties, a Chicago-based toy industry publication. My primary interest was in volumes from the mid-1940s through the end of the 1950s, seeking new information on the early days of Hartland, Breyer, and some of the companies that copied them.

Much of what I found has already been documented by earlier researchers, but I did turn up some fun new information that I don't think has been published yet. None of it is exactly earth-shattering, but it is the kind of minutiae that hobby history nerds like me live for.

First, some background---the earliest years of Breyer's history as a model horse manufacturer at the beginning of the 1950s are fairly murky. Very little in the way of early documentation has come to light, so collectors have made educated guesses based on the ads, catalogs, and price lists that do exist. We know the broad strokes, that Breyer started with the Western Horse in 1950 after taking over a contract with Mastercrafters Clock and Radio Company formerly held by Hartland. And we know that within a few years, they had added the Boxer, Western Pony, Fury Prancer, Lassie, Brahma Bull, and the Walking Hereford Bull to their line up along with a variety of riders. The earliest known catalog probably dates to 1954, but earlier company-issued catalogs, if they ever existed, have yet to come to light. We therefore have to rely on other sources of information such as toy trade publications like the aforementioned Toys and Novelties for glimpses into Breyer's beginnings.

I started with 1948 and worked my forward page by page over the course of several 8 hour days. The number of Hartland ads in the 1950s in Toys and Novelties far outstripped those by Breyer, but what Breyer submitted was at least colorful and visually appealing. Most issues featured a "New Toys on Parade" section which generally promoted products that had been on the market for a few months and were selling well. The Hartland Victor (free-standing) was listed in the new toys column in 1950, and the Breyer Western Horse (also free-standing) was likewise endorsed in the same column in 1951. (We know both models were available a year earlier respectively, but that has already been covered in my Western Horse Shaped Objects blog series.) I found this nice Western Horse advertisement in a 1952 issue (this is not a new discovery for collectors; it's just pretty). The back of the page features an ad for Breyer's Money Manager bank. 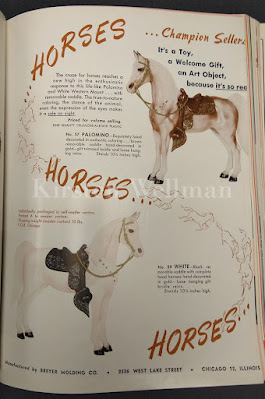 While it seems logical that Breyer's second model would be the Western Pony, it may in fact have been the Boxer which was featured in the "New Toys on Parade" column in February 1953. 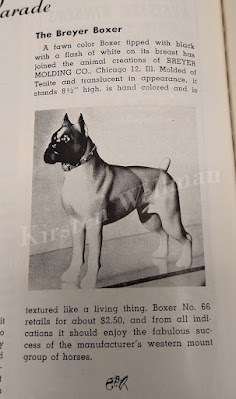 The March 1953 issue is where things begin to get interesting. We know from Breyer historian Nancy Young's research that the earliest ad for a Western Pony she was aware of dated from the September 1953 issue of Western Horseman magazine (as per her published books in the late 1990s). According to Hartland expert Mike Jackson who collaborated with Nancy in the early 2000s, she had by that point come to believe that the Breyer Western Pony pre-dated the Hartland Small Champ, and likely dated to early 1953 if not earlier. The article below puts paid to that theory. Or rather, the photo does!

The article is about toy sales reps Walter and Arthur Krenzien, a father and son team who started their business in downtown Chicago in about 1930. They were one of the biggest promoters for Breyer in the early 1950s, and their ads featuring Breyer models can be found in a variety of 1950s Toys and Novelties issues. This particular issue from March 1953 mentions Breyers only in passing as one of many lines promoted by the Krenziens. It's the photo combined with the date of the magazine issue that knocked my socks off.

To the best of my knowledge, this is the earliest proof we have of the existence of the Western Pony and the earliest date known for the black with gold trim colorway for the Western Horse and Pony. Because magazines are stocked and mailed in advance of their issue date, and because a certain amount of time is needed to write articles, lay out the articles, photos, and ads, and get the whole thing printed, the March 1953 issue of Toys and Novelties was very likely out by February of that year, presumably having gone to print at least the month before. Allowing time for writing and layout, it seems very likely that the actual photo used for the issue may have been taken some time in late 1952. Even if the Western Pony (and the black colorway for the Western Horse and Pony) were not yet available for sale in March 1953, we at least know the mold was functional and very likely in use by late 1952. It's entirely possible the Ponies (and the Boxer) were even sold for Christmas 1952.

I did not find an official "News Toys on Parade" release for the Western Pony as I did for the Western Horse and and Boxer, but I did find later ads for the Western Pony with various riders. It's possible the  Western Pony may predate the Boxer but simply wasn't advertised, or the two models may have been developed simultaneously. Given that Breyer was just getting started with model horses (and dogs), they may not have felt the need to promote every new release, or perhaps the Western Pony product announcement simply hasn't come to light yet. We may never know for sure, but it's fun to keep looking.

By 1954, Hartland was advertising their Champ models with cowboys and cowgirls, and by 1955, both Hartland and Breyer were in full swing offering various horse and rider sets. Nancy Young suspected that the Breyer riders probably predated all of the Hartland ones, but Hartland certainly beat them to the punch acquiring licensing rights for popular cowboy characters. But that is the subject for another blog post.

Just for fun, here are some other early Breyer ads I found. The March 1955 issue of Toys and Novelties featured an ad from Breyer wishing a happy business anniversary to the Krenziens. 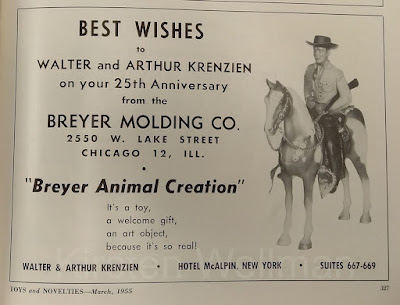 The May issue from the same year featured the Indian brave and a pair of Cowboys or Lucky Rangers. 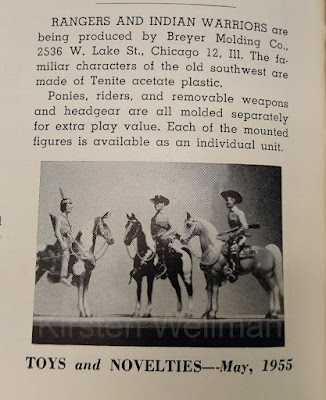 I am still working my way through other toy publications, and if I find anything fun, I'll be sure to update this post. Thanks for reading!

Posted by Kirsten Wellman at 2:46 PM