It's not quite Friday, but with BreyerFest rapidly approaching, I thought I'd make another post in the series about wooden horses and wooden wannabes.

In the 1960s, Breyer was not the only company producing plastic model horses that were finished in a faux-wood style. Hartland Plastics of Hartland, Wisconsin, a town about 25 miles west of Milwaukee, introduced a line of models called "woodcuts" beginning in 1964.These models differed from Breyer's faux-wood models in that they were sculpted to look as though were whittled or carved from wood rather than just painted to look that way.

The Hartland woodcut look was achieved in three different ways. Some models have an angular surface meant to look like carving marks: 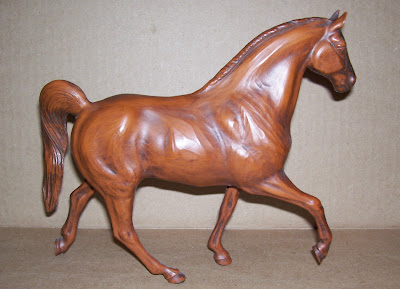 Some are both carved and marked with incised graining (in horizontal bands in this case): 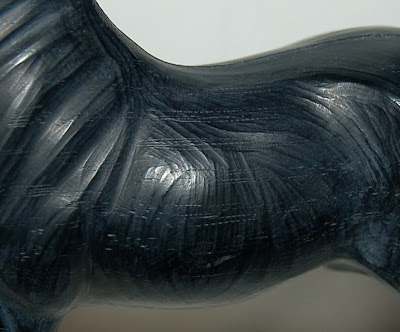 Carved (subtly) and grained (in swirls): 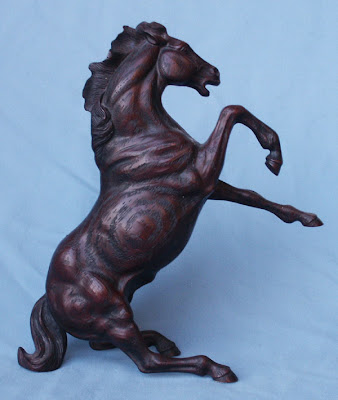 Only one mold shows graining but not carving: 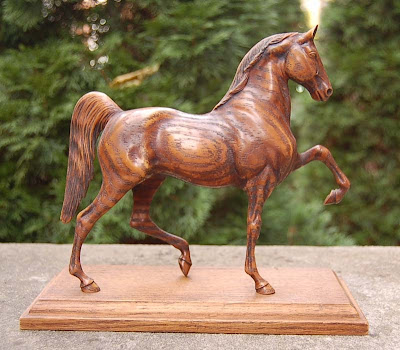 The woodcut molds are unique molds separate from the corresponding smooth body versions. They were sculpted by Roger Williams, and the carving and/or graining was added by Alvar Bäckstrand. The models came came in three shades: walnut (tan), cherry (dark reddish-brown), and ebony (black). They were usually cast in tan, reddish-brown, and blue-grey or black plastic respectively and had a wash of darker shading rubbed over the surface to highlight the woodgraining look. Some models, especially the later walnut pieces, have very little of the contrasting color applied. 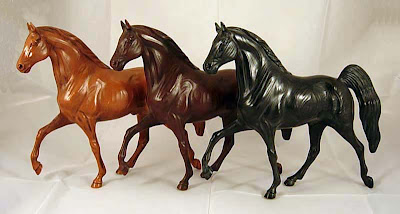 
Hartland issued the following molds as woodcuts in the mid-1960s: 9" Mustang (subtly carved and grained), 9" Tennessee Walking Horse (two mane variations, both carved), 9" Three Gaited Saddlebred (carved), 7" Saddlebred Family (carved and grained), 7" Thoroughbred Mare and Foal (carved and grained), and the 6" Arab Stallion (carved). All of these models were available in all three woodcut colors. The ebony and cherry colors were only issued between 1964-1966 whereas the walnut models were almost all available for 3 or 4 years in the mid- to late-1960s, and the 9" Mustang and Three Gaiter were also re-released in walnut from 1970-1973 when Durant took over the company.


Despite relatively short productions runs, the 9" models are all fairly common, the Mustang most of all. The 9" models bring around $20-40 depending on color and mold with the Mustangs tending more toward the $5-10 range because they are so easily found. The 7" and 6" models are considerably more scarce, having been limited in production in all colors to only 1 or 2 years. The Thoroughbred Mare and Foal for example were issued in 1965 only, making them the rarest of the bunch. The family sets often sell for around $100.

In the late 1960s, Hartland issued the woodcut Mustang in gold. Most were mounted on promotional Mustang Malt Beer signs to be displayed in bars. 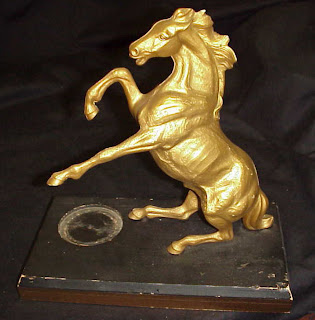 Hartland has passed through several owners and has therefore been in and out of business a number of times since the 1960s. Under two new incarnations, those headed by Paola Groeber from 1987-1990 and Sheryl Leisure from 2000-2007, the 9" Mustang and TWH woodcut molds were issued in several realistic horse colors. The woodcut models painted and sold by Paola were all test runs as far as I know. The models sold by Sheryl were a mix of small regular runs and test runs. For more information on these models, I highly recommend Hartland Horses and Dogs and Hartland Horses: New Model Horses Since 2000 by Gail Fitch, both of which are available directly from the author. 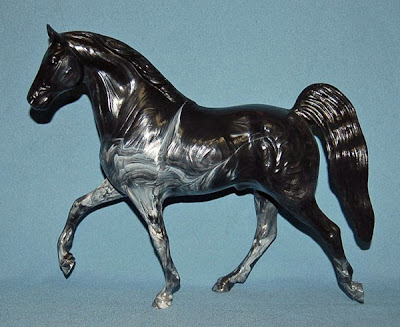 The rarest woodcut, to the best of my knowledge, is a one-of-a-kind test run 9" Five-Gaited Saddlebred. She came from the collection of a former Hartland employee and probably dates to the mid-1960s. She was sold mounted on a base as shown and is grained only, not carved. My best guess is that she was possibly a one-off prototype that was never put into put into production, perhaps because she was too similar to the 9" Three Gaiters. 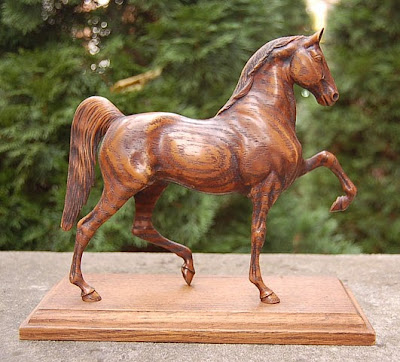 Some woodcut Hartlands were issued with gold stickers, a factor that can make an ordinary model extraordinary if found with the sticker still in place. I have seen two different styles---a round sticker and a rectangular sticker. Both indicate the models have a "hand-rubbed, wood carved finish." 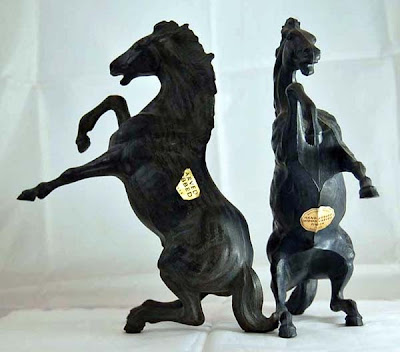 Ebony 9" Mustangs with two sticker variations
(The rectangular sticker on the left is partially missing.)
Finding Hartlands, especially woodcuts, in their original packaging is also unusual and adds significantly to their value. 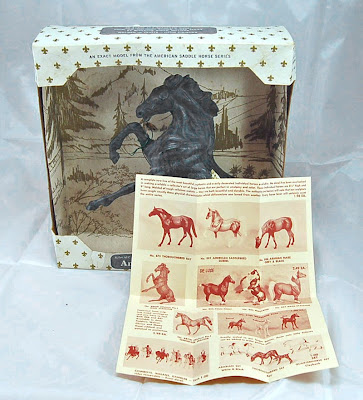 Ebony 9" Mustang with original box and catalog
If you enjoyed this post and want to learn more about Hartlands, Gail Fitch's books are the best source of information. I am still educating myself about Hartlands, and her books have been hugely helpful in learning about the company and the models produced under its various owners. Because they are highly stylized, Hartlands aren't to everyone's taste, but I find them charming, and I hope more hobbyists will take an interest in them.

The last installment featuring Peter Stone woodgrains will be posted after BreyerFest. Hope to see you there!

Posted by Kirsten Wellman at 7:36 PM