Most model horse collectors are aware of the various faux wood models that have been sold over the years by the major model horse producing companies. Both Breyer and Stone created plastic models painted to look as though they were made of wood called "woodgrains," and Hartland similarly made plastic horses sculpted to look as though they were carved from wood known as "woodcuts."

Few collectors however are aware of the company that very likely inspired the creation of all of these models, Grand Wood Carving of Chicago, IL. Chicago, you say? Yes, indeed, the original home of the Breyer Molding Company as well, and interestingly enough, the factories for both companies were located little more than a mile apart. But more on that later!

Grand Wood Carving got its start in 1939, producing a variety of horses and other animals carved from primarily Central and South American mahogany as well as a few other types of wood. Though they produced a variety of portrait horses and breeds, a large part of their equine line was devoted to racehorses, both Thoroughbreds and Standardbreds. 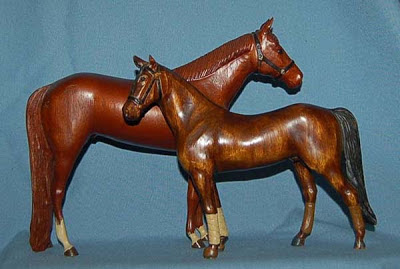 Because GWC horses are actually made of wood, they are of course all carved rather than injection molded like the plastic models inspired by them. To achieve a consistent look for each individual "mold," GWC utilized 24-spindle Salstrom carving machines which worked off patterns for each horse or animal. (For more information on these neat machines, please click here.) The pieces were all then hand-finished, a process that included sanding as well as staining. Because of this, GWC horses can vary a bit from piece to piece, particularly in leg thickness, stain color, and markings.

Many of the horses were issued with descriptive stickers, hang tags, or belly bands, and all of these bits of paper ephemera are decidedly rare today. Even the horses themselves are incredibly hard to find despite the company remaining in business until 1983. I suspect this scarcity is the result of several factors: 1) the models were probably never issued in large numbers, 2) they were expensive even when originally available, and 3)  most importantly, GWC pieces were not physically marked. I would guess that this lack of identifying marks  means many of them go undetected by people not familiar with the company. Happily, for those collectors interested in these quirky and charismatic folk art horses, Ed Alcorn has an amazing array of GWC models  displayed on his website here. Breyer collectors should find both the Whirlaway and Man O' War models familiar. More on their inspiration from GWC next Friday!
Posted by Kirsten Wellman at 5:38 PM